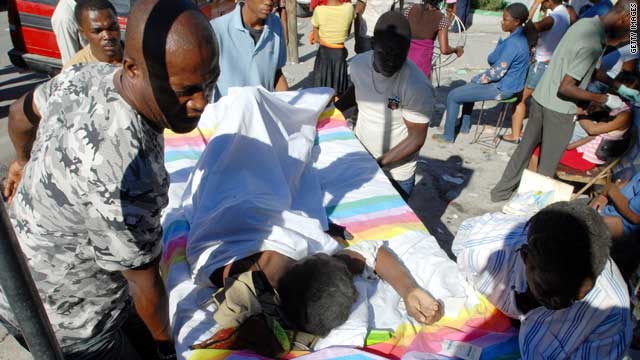 On Tuesday, a magnitude 7.0 earthquake ripped apart buildings, shearing huge slabs of concrete off structures in the poorest country in the Western Hemisphere. About 3 million people -- one-third of Haiti's population -- were affected by the quake, the Red Cross estimated.

The disaster cut power, electricity and other utilities. This could leave people without clean drinking water and at greater risk of malnutrition and disease. The potential new mass of displaced persons could create crowded, unsanitary conditions that facilitate the spread of contagious respiratory infections, said Dr. Peter Hotez, head of the department of microbiology at George Washington University.

"What you have is the perfect storm of infection," Hotez said. "What you have is a breakdown. It is already a fragile infrastructure with high rates of infectious and neglected tropical disease. Now there are potential breakdowns in sanitation, clean water, housing and subsequent crowding. That's a terrible mix."

Even before the earthquake, the country has been the subject of intense public health efforts, as nearly half the causes of deaths have been attributed to HIV/AIDS, respiratory infections, meningitis and diarrheal diseases, according to the World Health Organization.

Are you in Haiti and safe? Share your story with CNN iReport

The first medical response would be to find the people who are trapped in the rubble.

Usually in natural disasters people suffer extreme physical and mental shock along with the initial injuries caused by the disaster, such as amputations and fractures, said Dr. Tamman Aloudat, senior health officer with the International Red Cross in Geneva, Switzerland.

Watch more on the brewing medical crisis in Haiti

Video: Haiti faces medical crisis
What you're going to need, is something equivalent to a Marshall plan for Haiti. These are our neighbors.
--Dr. Peter Hotez, Chair of the Department of Microbiology, Immunology, & Tropical Medicine at George Washington University Medical Center

For those who survive with injuries, blocked roads, lack of supplies and medical attention can hamper recovery.

"In Haiti, if you have a serious injury or illness, if you're lucky, you can make it to the hospital," said Dr. Ted Kaplan, a pediatrician from Orlando, Florida, who formed a network of clinics and health organizations in Haiti. "They don't have much they can offer you. The situation now is there's no ambulance. If you don't get to the hospital, you don't have an orthopedic surgeon, you don't have a CT scan -- there's no equipment to deal with the injury."

On Wednesday, he spoke to CNN while anxiously waiting to hear from his in-laws, who live in Haiti.

"It's quite a disaster in a place that has no safety net," he said.

The lack of a safety net means that if left untreated, minor injuries or fractures can become life-threatening because they're left open to bacterial infections such as tetanus, doctors said.

But even the uninjured can face medical risks.

Interruptions in basic services such as the water supply can increase the risk of waterborne disease outbreaks. Animal and human fecal matter and bodies can become sources of contamination if they're in the water supply, Hotez said.

"The risks in the short-term are diarrheal infections, diarrheal diseases including typhoid fever and cholera," he said. Risks also include bacterial infections such as shigellosis (which causes diarrhea) and salmonella enterocolitis (a common type of food poisoning).

Bacterial and mosquito-borne diseases such as dengue and malaria are also major risk factors, Aloudat said.

"The local Red Cross will attempt to go and start monitoring about outbreak epidemics," he said.

The International Red Cross said it is deploying stocks of non-food relief items to 10,000 families, and additional staff will be deployed as soon as possible.

I have the hope this situation may lead to improvements, because it's bringing lots of attention and help to the area.
--Dr. Ted Kaplan, founder of Cap Haitien Health Network
RELATED TOPICS

Any interruptions in fighting these preventable diseases has disastrous consequences, Hotez said.

"This is going to a big setback for public health control measures, and you will see the impact of this earthquake at least for months and possibly for years," Hotez said. "What you're going to need is something equivalent to a Marshall plan for Haiti. These are our neighbors. You go to Haiti, it's like you go back in time 500 years and see incredible neglected tropical diseases that don't need to be there."

That's another tragedy of the earthquake, said Kaplan, who formed the Cap Haïtien Health Network to tackle preventable diseases such as diarrhea, malaria and malnutrition.

When the rubble is cleared and the bodies are buried, Kaplan worries that "the minor safety nets -- many of them are not going to be there."

"I have the hope this situation may lead to improvements, because it's bringing lots of attention and help to the area," Kaplan said. "There's that silver lining."