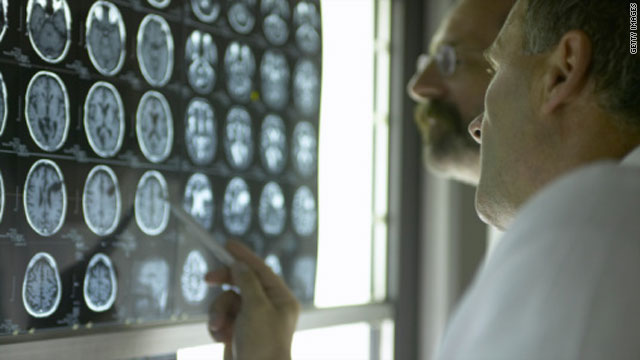 (CNN) -- Doctors are already good at diagnosing Alzheimer's disease in a patient with obvious symptoms, which include memory loss, vision problems and confusion. But the cutting-edge research is looking for the brain mechanisms of the condition at its earliest stages, maximizing the potential for intervention.

Two studies published this week that may help pave the way for better treatments for people with Alzheimer's, which affects as many as 5.3 million Americans, according to the Alzheimer's Association. One is a drink that you may one day be able to pick up at the pharmacy; the other is a detection method.

Drink to your health?

One of the features of a brain with Alzheimer's disease is the loss of synapses, which are junctions between two neurons or between a neuron and a muscle. Research suggests some connection between low numbers of synapses in a person's brain and Alzheimer's symptoms such as memory impairment and language deterioration.

Scientists have developed a drink called Souvenaid that is a "medical food," meaning it's taken under the guidance of a physician to manage a specific condition. The drink has three components -- uridine, choline, and the omega-3 fatty acid DHA -- that, working together, help restore synapses, said Dr. Richard Wurtman, professor at the Massachusetts Institute of Technology and co-author of the study. Uridine is a molecule used in the genetic coding for RNA, choline is in the vitamin B family, and DHA is found in certain fish and fish oils.

These nutrients are already found in the human body and have been shown to be safe, he said. But taking a supplement of any one of them will not have the same beneficial effect, he said. Together in the right proportions, the cocktail increases the production of fatty constituents and proteins needed for synapses.

The study looked at 225 patients who had mild Alzheimer's, according to an examination. Some took Souvenaid, and the control group participants received a non-medical drink, once a day for 12 weeks.

They found that patients showed significant improvement in the delayed verbal recall task, in which participants were asked to remember what they had been told earlier. The idea is that the formation of synapses delays the symptoms of Alzheimer's, but it is not a cure, experts said.

"There was a clear difference. The difference was greatest in people with very mild but quite real Alzheimer's," he said.

The product may be commercialized as early as next year, Nigel Hughes, general manager of Nutricia America. Nutricia is a unit of the international food giant Danone (Dannon in the United States), for which Wurtman is also a consultant.

There are other clinical studies of Souvenaid going on of 500 participants each, and the company plans to do an "early experience program" of selling the product in a small geographic area in the United States, having it available in pharmacies, he said.

Although the product has been shown to be safe, there is no evidence whatsoever that it should be taken by anyone who does not have mild or early stage Alzheimer's disease, Hughes said.

Early Alzheimer's patients drinking the combination of these nutrients is akin to pregnant women taking folic acid supplements, Wurtman said. It's not that they are deficient in these nutrients, but the addition of more of them carries benefits, he said.

Yian Gu, postdoctoral researcher in neurology at Columbia University Medical Center, who studies the relationship between diet and Alzheimer's, said the study looks promising if the claims of memory improvement hold up, but noted that further research should be done to confirm those results. There should also be comparisons with nutritional supplements currently available on the market, such as multivitamins and fish oil, Gu said.

There were also cognitive and memory tasks that the drink did not seem to improve, according to the study, and the researchers should look further into what other improvements can be seen besides the verbal recall finding, Gu said.

The study is published in the journal Alzheimer's & Dementia.

Not all the news on Alzheimer's treatments is positive. Patients in a phase III trial for tarenflurbil, a drug that showed promise in an earlier phase II trial, did not experience improvement in cognition or daily function compared with those who received a placebo, according to a recent study in the Journal of the American Medical Association.

Scanning for the earliest signs

While the Souvenaid study focused on the loss of synapses as the mechanism behind Alzheimer's symptoms, an Italian group is working on identifying a different marker of the condition.

In a study published in the journal Neurology, researchers showed that a kind of MRI called diffusion tensor imaging may pick up signs of Alzheimer's in healthy elderly individuals.

Lead author Dr. Giovanni Carlesimo, of Tor Vergata University and the Santa Lucia Foundation in Rome, Italy, said the findings are preliminary but could be useful for future drug therapies to target the specific brain changes shown on the scan.

Researchers looked at the hippocampus, the brain structure associated with memory. They found that the mean diffusivity of the hippocampus -- a measure of how water is distributed within the tissues -- was correlated with how well participants performed on tests of verbal and visual-spatial memory.

The mean diffusivity in the hippocampus, as reflected in this brain scan, could represent some of the earliest structural changes that occur in the early stages of Alzheimer's, researchers say.

The research was done on 76 healthy people ages 20 to 80. The effect was most pronounced in the over-50-year-olds, the scientists reported.

The study is an important demonstration that MRI can be used to understand age-associated changes in the brain, said Adam Brickman, assistant professor of neuropsychology at Columbia University Medical Center.

But Brickman cautioned that this does not mean everyone should request this test.

"This might be something that will be useful down the road, but it's not diagnostic right now," he said.