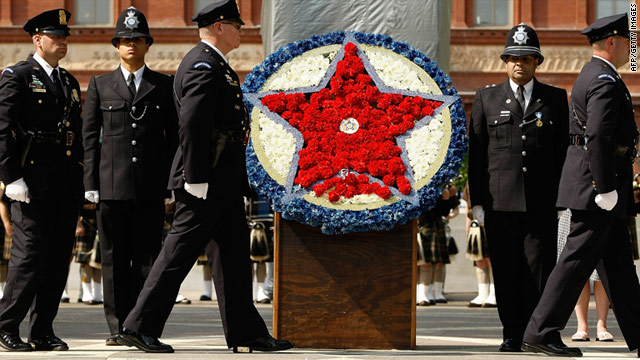 In the past year, 18 officers were killed in Texas, the highest in any state.
STORY HIGHLIGHTS

(CNN) -- The shooting death of a Texas police officer late Tuesday adds to a grim toll: A law enforcement officer was killed every 53 hours in the United States this year, according to a new report.

Line-of-duty deaths jumped by 37% in 2010, according to the report by the National Law Enforcement Officers Memorial Fund.

In the past two days, CNN has reported the deaths of two police officers: one in Texas and another one in Atlanta.

An officer was killed Monday during a traffic stop in Atlanta. Late Tuesday night, an Arlington police officer was among three people killed in a shooting at an apartment complex.

Officer killed after responding to call

These incidents are part of an overall trend of increased violence against police officers and law enforcement professionals this year. According to preliminary data compiled by the memorial fund, a total of 160 federal, state and local law enforcement officers died in the line of duty during the past 12 months, an alarming increase that follows two years of declining deaths among the nation's policing professionals.

"Our law enforcement officers are being asked to do more today with less," said memorial fund Chairman Craig W. Floyd. "And it is putting their lives at risk."

During the past year, 18 officers were killed in Texas, the highest in any state. It was followed by California with 11, Illinois with 10, Florida with nine and Georgia with seven.

Since the first known line-of-duty death in 1792, nearly 19,000 U.S. law enforcement officers have made the ultimate sacrifice.