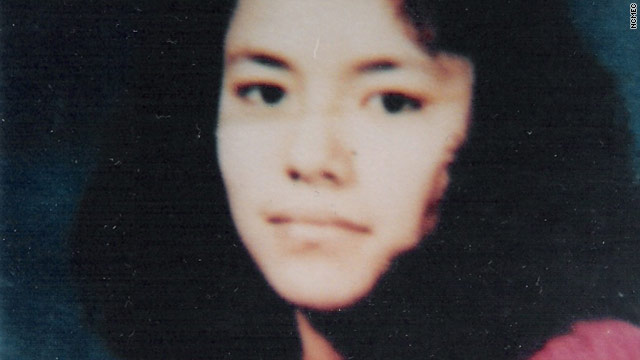 Rosemary Diaz, 15, played the flute and was a favorite of her teachers. She vanished in November 1990.
STORY HIGHLIGHTS

(CNN) -- It is a rite of passage for every teenager: A first job brings new responsibility, greater maturity and even a little spending money.

Rosemary Diaz, 15, was excited about entering the work force as a clerk at Dane's Country Store just down the road from home in Danevang, a one-traffic-light town south of Houston that is known as the Danish capital of Texas.

The small convenience store sold everything from hamburgers to gasoline, and Rosemary was trusted to do the work on her own.

But on the night of November 24, 1990, just weeks into the job, Rosemary was waiting for an older sister, Elia, and newborn niece to visit her at the store, police say.

Rosemary called home at 7:30 p.m. to make sure they were still coming.

Soon afterward, two customers entered the shop, and no clerk was to be found, called police.

They found Rosemary's car parked outside. Her purse with cash and her paycheck were left behind in the store, police say.

No money was missing from the register, and there were no obvious signs of a struggle.

Only the soda machine had been moved and the front leg bent, said Marek, now a lieutenant with the office.

"We had just spoken to her,'' said Elia Diaz. "We get there, and the sheriff's department car is out there.

Right away, my heart sank to the ground and it was like, 'Oh my goodness, I wonder what happened to Rosemary?' "

Elia and her mother urged authorities to search for Rosemary in the surrounding fields and to search the trunk of the girl's car.

"All the teachers loved her. They would say, 'Oh, Rosemary, she's such a doll!'
--Irma Diaz, sister
RELATED TOPICS

The store was closed off as a crime scene while the two customers and the Diaz family were questioned.

That day, a local man who wore an eye patch and was nicknamed "One-Eyed Joe" had snapped a Polaroid photo of Rosemary, police say.

The picture was found on the store counter. According to Marek, the man was interviewed and cleared, yet the circumstances around the photo remain unclear.

To this day, there are no strong leads and for Rosemary's family, many nagging 'what ifs'.

Elia Diaz says she almost stopped by the store earlier that day to buy a drink. Instead she drove to her mom's house first.

"Maybe I would have saved her."

Rosemary, the daughter of immigrants from Mexico, was in the National Honor Society, her sisters say. She loved dancing and enjoyed listening to hits on the radio.

"All the teachers loved her," recalls Irma Diaz, another older sister.

Years later, when Elia's daughter decided to take up the instrument, the girl asked her mom whether she could use Rosemary's flute to honor her long-lost aunt.

The Diaz family struggles with a lack of information about Rosemary's disappearance.

"It just troubles me that we don't know anything," Irma Diaz says. "That's the hardest part. You're angry at the world; you're angry at God."

Diaz says she always notices the stories in the news about a missing person being found either dead or alive.

"They have closure, the families, we don't have closure. It's just an ongoing thing that baffles my mind.''

Rosemary would now be 35. Elia Diaz says she and her sisters have kept Diaz as their last name to stay connected with her.

Rosemary was 5-foot-6 at the time with a quarter inch scar over her left eyebrow.

She was last seen wearing a black T-shirt with blue jeans and a gold pendant and amethyst ring from her quinceanera, the celebration of her 15th birthday.

"We can only hope that somebody knows something that will pull at their heartstrings and if they can remember anything or bring something forward, it will be helpful," Marek said.

If you have information on Rosemary Diaz, contact the Wharton County Sheriff's Office at 979-543-TIPS or the National Center for Missing & Exploited Children at 1-800-THE-LOST.