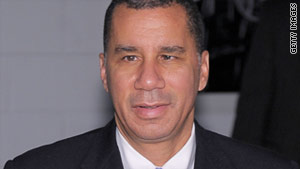 New York (CNN) -- A day after commuting the sentence of a man convicted of killing an unarmed teenager during a racially charged confrontation, New York Gov. David A. Paterson said he regretted not informing the victim's family first.

"In retrospect I would have sought the (victim's family's) input and that's why I spoke with the family today," Paterson told reporters at a news conference Friday morning.

John White, an African-American, was convicted of second-degree manslaughter and third-degree criminal possession of a weapon in the shooting death of Daniel Cicciaro, 17, who was white.

White was serving a sentence of up to four years in prison when Paterson commuted his sentence Thursday.

"I would not have changed my mind about the decision I made ... but there were some issues raised" in his conversation with Ciciarrio's mother "that I am going to think about going into the holidays," Paterson said.

Paterson said in a written statement: "My decision today may be an affront to some and a joy to others, but my objective is only to seek to ameliorate the profound suffering that occurred as a result of this tragic event."

"It's a blessed day, it truly is," White told CNN affiliate WPIX. "I want to thank my savior, the Lord Jesus Christ. I also want to thank the governor for making this happen today."

But the move was criticized by prosecutors who helped put White behind bars.

"I strongly believe the governor should have had the decency and the compassion to at least contact the victim's family to allow them to be heard before commuting the defendant's sentence," said Spota, whose office prosecuted White.

The shooting occurred in August 2006 in the Long Island town of Riverhead, after a group of teenagers went to White's home over a dispute with his 19-year-old son.

White said he was protecting his family from a white lynch mob and the gun discharged accidentally.

Prosecutors said White should have called police instead of deliberately choosing to confront Cicciaro and a group of his friends with a .32-caliber Beretta.

Riverhead police said the incident started with an internet prank sent by another person from the MySpace page of White's 20-year-old son.