Have your say on possible 'Billy the Kid' pardon 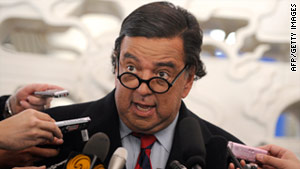 New Mexico Gov. Bill Richardson said he will announce a decision after Christmas but by December 31.
STORY HIGHLIGHTS
RELATED TOPICS

(CNN) -- The governor of New Mexico has received about 400 responses on a special website dedicated to answering a generations-old question: Should outlaw Billy the Kid get a pardon in the killing of a sheriff?

Gov. Bill Richardson, called a Billy the Kid buff, is looking at an old promise by another governor, and not the Kid's cold-blooded reputation, in deciding whether to issue a posthumous pardon, officials said.

"I think he will take the responses into account, particularly the learned responses," Richardson's deputy chief of staff, Eric Witt, said Wednesday.

Those interested have until December 26 to belly up to the bar and weigh in. The governor, who is also reviewing the historical record, has said he will announce a decision after Christmas but by December 31, when his term ends.

Billy the Kid, born Henry McCarty, also known as William H. Bonney and Henry Antrim, died at the hands of another sheriff, Pat Garrett, when he was only 21.

Some members of the Garrett family, including grandson Jarvis Patrick (J.P.) Garrett, oppose the pardon. Besides arguing that Billy the Kid was an incorrigible killer, they want to make sure Pat Garrett is absolved of any wrongdoing related to the killing and a Bonney jail escape.

Garrett killed Bonney on July 14, 1881, in Fort Sumner weeks after Bonney escaped from a jail. The sheriff, legend has it, was hiding in the dark and shot the Kid when he entered a room. Garrett himself was gunned down in 1908 at age 57.

J.P. Garrett told CNN Wednesday that there is no written proof that Wallace made the promise and that the charges were federal, which did not give the governor the right to make the offer.

McGinn also rebuffed Garrett's questions about her independence because her husband was appointed state chief justice by Richardson. Chief Justice Charles Daniels is not involved in the matter, she said, adding, "I am not an appendage of my husband."

"Why would he [Bonney] surrender himself ... unless there was something in it for him?" McGinn asked Wednesday.