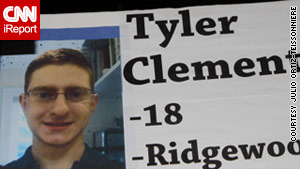 Tyler Clementi's body was recovered from the Hudson River in September, more than a week after he committed suicide.
STORY HIGHLIGHTS

(CNN) -- The parents of a Rutgers University student who committed suicide after his roommate and another student allegedly broadcast online his sexual encounter with another man have notified the school they may sue.

Jane and Joseph Clementi say the school should have done more to prevent the death of their son, Tyler. On Friday, they notified the university that they were filing a "notice of claim," meant to uphold their right to bring a lawsuit in the coming months, Rutgers spokesman E.J. Miranda said Wednesday.

"Subject to further investigation, it appears that Rutgers University failed to act, failed to put in place and/or failed to implement, and enforce policies and practices that would have prevented or deterred such acts, and that Rutgers failed to act timely and appropriately," the notice said. A copy of the notice was provided to CNN by the university.

Rutgers university responded to the notice with a statement saying that while it shares "the family's sense of loss of their son, who was a member of our community," it also recognizes "that a grieving family may question whether someone or some institution could somehow have responsibility for their son's death."

The university is not responsible for his suicide, it said.

Inside the Rutgers tragedy
RELATED TOPICS

Clementi jumped from the bridge after two other Rutgers students allegedly used a web camera to capture a sexual encounter between him and another man and streamed it online.

Dharun Ravi, 18, who was Clementi's roommate, and Molly Wei, 18, have been charged with invasion of privacy.

Their lawyers have asserted their innocence.

Last month, Clementi's family consented to the use of his name on a piece of anti-harassment federal legislation known as the "Tyler Clementi Higher Education Anti-Harassment Act."