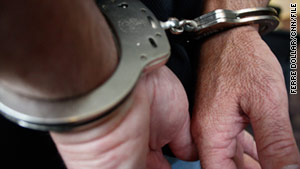 Robberies during the period were down 10.7%, rapes were down 6.2% and burglaries dropped 1.4%, the report says.
STORY HIGHLIGHTS

Washington (CNN) -- Violent crime in the United States dropped markedly in the first half of 2010, according to FBI statistics released Monday.

Overall violent crime fell 6.2% from the same period last year, according to the report, and the new numbers include a 7.1% decrease in homicide.

The statistics were released in the first official report on crime for 2010, and are viewed as encouraging by the FBI, which compiles crime reports from law enforcement agencies across the nation. In recent years, figures for the first half of the year have proved to be a good indicator of crime levels for the full year.

Robberies during the period were down 10.7%, motor vehicle thefts and arson declined 9.7%, rapes were down 6.2%, aggravated assaults were down 3.9%, and burglaries dropped 1.4%.

The FBI report does not give reasons for the drop in crime, but criminologists have recently indicated an aging population, along with ramped-up law enforcement, have contributed to the decline in recent years. The trend has surprised experts who have historically seen crime increase during difficult economic periods.

In the Northeast, reported homicides actually rose by 5.7%. That compares with a dramatic 12% decline in homicide in the South, and drops of 7.1% in the West and 6.3% in the Midwest.

Nonviolent property crimes dropped in the first half of this year in those larger cities by 4.8%, while falling 2.8% nationally, the report showed.