Ex-cop gets 8 years for role in post-Katrina shootings 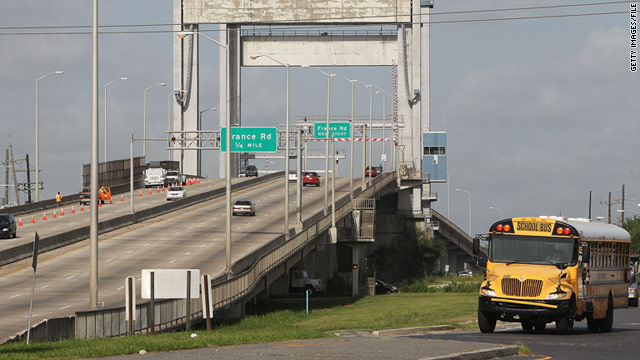 (CNN) -- A former New Orleans, Louisiana, police officer who pleaded guilty to covering up police shootings of civilians on a Louisiana bridge in the days following Hurricane Katrina was sentenced Wednesday to eight years in prison, authorities said.

Former officer Michael Hunter pleaded guilty April 7 in federal court in New Orleans to conspiracy to obstruct justice and for misprision of a felony (for concealing a known crime), in the Danziger Bridge shootings in New Orleans that left two dead and four seriously wounded, the Department of Justice said in a statement Wednesday.

Hunter also was ordered to pay a $2,500 fine and serve three years' supervised release. His sentence will begin in March 2011.

Judge Sarah Vance said that the kind of behavior displayed by multiple New Orleans officers on Danziger Bridge less than a week after Hurricane Katrina was "poisonous."

"It breeds mistrust, cynicism ... and the antidote is punishment that will deter others," Vance said, according to CNN New Orleans affiliate WWL.

In the first September 4, 2005, shooting, on the east side of the bridge, one person, James Brissette, 19, was killed and four people were wounded, prosecutors said.

In another shooting on the bridge's west side, Ronald Madison, 40, a severely disabled man, was killed. Madison's brother, Lance, was arrested but later released without being charged, authorities said.

Inside the courtroom, Hunter looked at the Madison family and apologized, saying, "Nothing I can say or do can take your pain away," according to WWL.

Four other former officers have also pleaded guilty in the case and six other former or current officers are set to go on trial in June. Hunter, who has said he doesn't believe his shots hit anyone, is expected to be one of the government's star witnesses in that trial, WWL reported.

A CNN special, "Shoot to Kill," examined the shootings at Danziger Bridge and other police actions in the days after Katrina.

It was a week of dire flooding, rampant looting and death by drowning. Police were strained, beset by suicides and desertion. Four people were killed in confrontations with police that weekend alone.

Lance Madison told CNN about how he and his brother left their flooded home and were crossing the bridge to find shelter. They were unwittingly headed to an area where armed looters were marauding.

According to court documents, Hunter drove to Danziger Bridge in a rental truck carrying officers in response to a radio call about gunshots and reports that officers on the nearby Interstate 10 bridge had come under fire. At the time, New Orleans police said they got into a running gun battle with several people.

That's when officers encountered the Madisons.

Lance Madison told CNN that police officers were the only ones shooting, as he and his brother ran for safety from the area. A witness told CNN in 2006 that police shot Ronald Jackson in the back as he ran toward a motel at the bottom of the bridge.

"Hunter ... admitted that he was present on the west side of the Danziger Bridge when an officer, identified as Officer A, shot and killed Ronald Madison, a civilian who was running away from officers with his hands in view, and did not have a weapon or pose a threat," the Justice Department statement said.

Hunter admitted that officers on the east side of the Danziger Bridge fired at civilians, even though the civilians did not appear to have any weapons, the Justice Department said Wednesday.

"Hunter also has admitted that he fired his weapon repeatedly at civilians who were running away over the bridge," according to the statement. "In addition, Hunter has acknowledged that he did not see any weapons on these civilians, and that the civilians did not appear to pose a threat to officers as they ran up the bridge."

The former officer said that he was present on the west side of the Danziger Bridge when an officer killed Madison, the Justice Department said.

Hunter participated in a conspiracy to cover up the truth about what happened on the bridge," the department said.

Prosecutors can ask Vance to reduce Hunter's sentence once he finishes cooperating with the investigation, WWL said.