Somali man to facing 30 years in prison for piracy 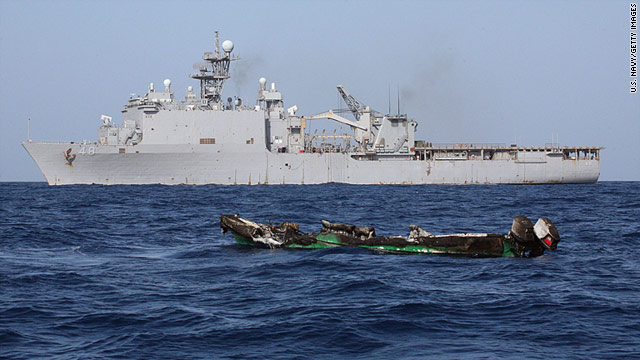 A burned-out pirate skiff sits near the USS Ashland in the Gulf of Aden on April 10.
STORY HIGHLIGHTS
RELATED TOPICS

(CNN) -- A federal court on Monday sentenced a Somali man to 30 years in prison for acts related to high-seas piracy, according to a statement by the U.S. Attorney's office for the Eastern District of Virginia.

"Today marks the first sentencing in Norfolk for acts of piracy in more than 150 years," U.S. Attorney MacBride said in the statement. "Piracy is a growing threat throughout the world, and today's sentence ... demonstrates that the United States will hold modern-day pirates accountable in U.S. courtrooms."

Jama Idle Ibrahim pleaded guilty in federal court in August, admitting he had intended to seize a U.S. merchant vessel on April 10 and hold it for ransom.

Ibrahim and five other would-be pirates learned too late that they had instead pulled alongside a U.S. Naval vessel, the USS Ashland.

They were captured after firing at those on board, according to the statement.

The attack occurred in the Gulf of Aden between the Horn of Africa and the Arabian Peninsula.

Until this year, there had not been a piracy-related conviction in the United States since 1861, during the Civil War, officials said.

In May, Abduwali Abdukhadir Muse, who was accused of leading the attack on the Maersk Alabama in April 2009, pleaded guilty to felony counts of hijacking maritime vessels, kidnapping and hostage taking.