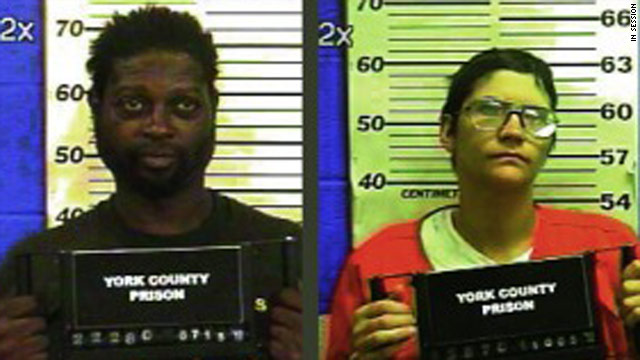 Louann Bowers and Sinhue Johnson, who are accused of endangering their five children, are due in court Friday.
STORY HIGHLIGHTS
RELATED TOPICS

(CNN) -- State authorities discovered five children in south central Pennsylvania huddled in a condemned house without heat, running water or anything that could reveal their identities.

The children -- ranging in age from 2 to 13 -- have no birth certificates, no record of immunizations and no school records, having been largely kept away from society for several years, York County police Lt. Tim Utley said.

"You always have the occasion when people are living in poor conditions, but this was extreme," Utley said. "They're going to have to be assimilated into what's not considered normal for them."

The parents, Louann Bowers and Sinhue Johnson, were arrested over the summer, when the children were found.

They have been charged with five felony counts of child endangerment and are awaiting a court appearance Friday.

The calls prompted workers to investigate the area; they alerted police after discovering the squalid conditions in which the children were living, he said.

Representatives for York County Children and Youth Services would not comment, citing the ongoing investigation.

"She acknowledges that she should have done more for the children, but in no way were they in danger," Ronald Gross said. "[The parents] did not engage in many community-based activities and led a very private life."

Bowers ran away from home when she was 16, which may have contributed to her private adulthood, Gross said.

She gave birth to her sixth child Monday in York County prison, he added.