Landmark terrorism trial ends in acquittal on all but 1 count 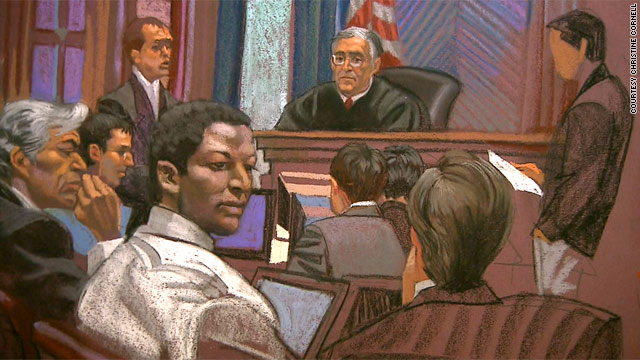 Ahmed Khalfan Ghailani was convicted of one charge in connection with 1998 U.S. Embassy bombings in Kenya, Tanzania.
STORY HIGHLIGHTS

New York (CNN) -- Ahmed Khalfan Ghailani was acquitted Wednesday of all but one count of conspiracy-related charges in a landmark civilian trial involving the first Guantanamo detainee to be tried in civilian court.

Ghailani was convicted by a federal jury on a charge of conspiracy to destroy buildings and U.S. property in connection with his role in the 1998 U.S. Embassy bombings in Kenya and Tanzania.

The trial had been widely considered a testing ground for the Obama administration, which has said that it could try some terrorism suspects outside military tribunals and in civilian courts.

Ghailani's lawyer, Peter Quijano, said Wednesday's verdict was "a reaffirmation that this nation's judicial system is the greatest ever devised."

"It is a truly a system of laws and not men," he said.

Ghailani guilty on just 1 of 285 counts

Ghailani acquitted on all but 1 count
RELATED TOPICS

The U.S. Justice Department responded in a written statement, referring to the one guilty finding by saying, "We respect the jury's verdict and are pleased that Ahmed Ghailani now faces a minimum of 20 years in prison and a potential life sentence for his role in the embassy bombings."

U.S. Attorney Prett Bharara in a statement that he would seek the maximum sentence of life without parole at sentencing, which is scheduled for January.

Ghailani faced charges of conspiracy and murder in the 1998 attacks on U.S. embassies in Nairobi, Kenya, and Dar es Salaam, Tanzania. The bombings, for which al Qaeda claimed responsibility, killed 224 people, including a dozen Americans, and wounded thousands of others.

Federal Judge Lewis Kaplan had rejected a defense plea for a mistrial on Monday after a juror claimed to have been chastised by fellow jurors for disagreeing with their conclusions.

Kaplan read aloud a note that he received from the juror, who asked to be "excused or exchanged" in the trial of the 36-year-old Tanzanian, telling his defense attorneys that it was not grounds for a mistrial.

Ghailani's attorneys had maintained that he was exploited by al Qaeda for his knowledge of Tanzania, but was not a conspiring member of the group that later claimed responsibility for the attacks.

Wednesday's verdict raises broader questions regarding those being held in the detention facility at Guantanamo Bay Naval Base in Cuba and their prospects of facing civilian courts.

"The greater relevance has been the debate in this country of whether [alleged] terrorists held in Guantanamo can effectively be tried in a federal district court even though there may be problems with government witnesses," said Scott Silliman, executive director for the Center on Law, Ethics and National Security.

Kaplan previously had ruled that prosecutors couldn't call a key witness in the trial because Ghailani was coerced into disclosing the witness' identity.

Reaction to the verdict was quick in coming.

Liz Cheney, daughter of former Vice President Dick Cheney and a co-founder of the group Keep America Safe, joined in a statement from the group lashing out at the Obama administration for having "rolled the dice in a time of war" with a civilian trial.

The statement called on Obama to "end this reckless experiment. Reverse course. Use the military commissions at Guantanamo that Congress has authorized."

Meanwhile, human rights advocates lauded Wednesday's verdict as evidence of a fair trial, which they said signals "the [Obama] administration should move forward with other detainees they wanted to try," according to Dixon Osburn, spokesman for Human Rights First -- a New York-based advocacy group.

"Those that said [the trial of Guantanamo detainees in civilian courts] would be a circus were proven wrong," he said.

By contrast, Rep. Peter King, R-New York, said he was "disgusted at the total miscarriage of justice today in Manhattan's federal civilian court."

"He assured us that 'failure is not an option,'" King said in a written statement.

The prosecution, which made its closing arguments November 8, had accused Ghailani in a total of 285 counts of conspiracy and terrorism-related charges.

Ghailani was captured in Pakistan in 2004 and moved to Guantanamo two years later. He was transferred last year to a federal prison in New York.

CNN's Kiran Khalid and Christina Romano contributed to this report.