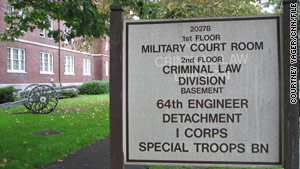 A hearing at Joint Base Lewis-McChord in Washington will determine if Pfc. Andrew Holmes should be court-martialed.
STORY HIGHLIGHTS
RELATED TOPICS

(CNN) -- Pfc. Andrew Holmes of Boise, Idaho, faces military officials Monday who will determine if there is enough evidence to court martial him over the premeditated killing of three Afghan civilians.

He is one of five U.S. soldiers from the 5th Stryker Brigade accused of killing them for sport and staging the deaths to look like legitimate war casualties.

Spc. Jeremy Morlock was the first of the five to face an Article 32 hearing at Joint Base Lewis-McChord in Washington.

In all, officials charged 12 U.S. soldiers in what they called a conspiracy to murder Afghan civilians and cover it up, along with charges they mutilated corpses and kept grisly souvenirs.

Five of the soldiers face murder charges, while seven others are charged with participating in a coverup.

Morlock is charged with three counts of murder. He is accused of killing Afghan civilian Gul Mudin in January with a grenade and rifle; killing civilian Mullah Adahdad in May in a similar manner; and shooting to death Marach Agha in February.

According to the military documents, the five were also involved in throwing grenades at civilians.

Authorities allege Gibbs kept finger bones, leg bones and a tooth from Afghan corpses. Wagnon allegedly kept a skull from a corpse, according to charging documents.

Holmes is charged with the first reported civilian killing in January. He is accused of conspiring with Morlock to shoot at the civilian and then toss a grenade so it would look like the soldiers were under attack.

He is also charged with smoking hashish, possessing a dismembered human finger and wrongfully possessing photos of human casualties.

"There is no proof that ... Holmes caused or conspired to cause the death of any human being unlawfully," Conway said.

But it was the Army's own charging documents that portrayed a platoon gone rogue. In explicit detail the Army wrote how killings were staged -- how a fellow soldier was beaten and how Gibbs threw human fingers at another soldier believed to have snitched about the group's hashish smoking.

The Army moved to restrict attorney access to what has been described to CNN by some who have seen them as a series of gruesome photos of dead Afghans by allowing inspection of the material only at a secure facility at Lewis-McChord.

A number of attorneys have objected, telling CNN the Army is limiting their ability to defend their clients because it is more concerned how the charges are being played in the media and perceived in Afghanistan.

Holmes' attorney said he plans to put on a vigorous defense of his client, arguing that he killed no one. And he said he plans to ask serious questions about the Army's command of a platoon that everyone agrees went terribly astray.