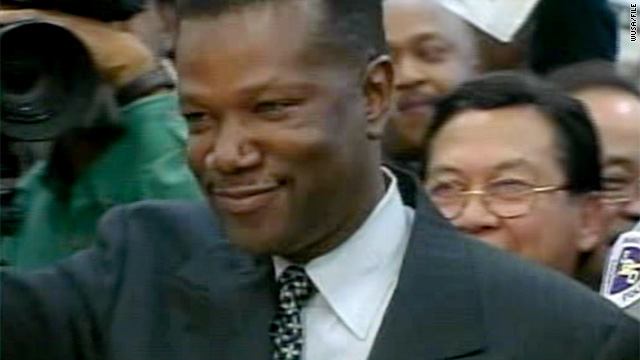 Washington (CNN) -- Panicked as the FBI closed in Friday morning, Prince Georges County Executive Jack Johnson and his wife Leslie raced to find a $100,000 check for an alleged kickback and flush it down the toilet.

With agents knocking at the door, Leslie Johnson stuffed nearly $80,000 in her bra.

The dramatic end to an alleged years-long kickback scheme is outlined in detail in an affidavit written by FBI investigator Wendy Munoz, whose team was monitoring wiretaps.

Johnson, who has served as the executive of Prince Georges County since 2002, was taken into custody along with his wife.

The Johnsons made a first appearance in federal court late Friday in Greenbelt, Maryland, just outside Washington.

They were both charged with tampering with evidence and destruction of records. U.S. Attorney Rod Rosenstein stressed the investigation is continuing.

The Johnsons were released on their own recognizance, but Jack Johnson will be required to wear a monitoring device. He presumably will be allowed to continue serving out the last weeks of his expiring term as county executive if he chooses. The judge, however, ordered him not to attempt to destroy any evidence.

Jack Johnson had been the Prince Georges County prosecutor prior to his eight years as executive.

The ten-page affidavit says the FBI began investigating Johnson in 2006 when it learned that certain real estate developers were paying Johnson for contracts. That led to a "a series of authorizations for the interception of wire communications."

The frantic end began early Friday when Johnson allegedly received a $15,000 payoff, and the FBI suddenly barged into the room to demand an explanation.

Johnson told them the cash was for a party marking the end of his tenure as county executive. He also claimed he had no dealings with the developer who was with him.

The FBI says Johnson made a series of false statements. The agents let him go but then eavesdropped on a series of frantic phone calls between Jack and Leslie Johnson as Jack Johnson and the FBI headed for the Johnsons' Mitchellville, Maryland, home.

"Two women (agents) are at the door," Leslie told her husband.

"Don't answer it," Jack said. He told her to run upstairs to their bedroom and go to "my drawer."

"You will see a check in there that [an unidentified developer] wrote to me," he said.

The affidavit says when Leslie found the check Jack told her to tear it up. "Do you want me to put it down the toilet?" she asked. Jack Johnson replied, "Yes, flush that." The agents monitoring the phone calls heard a flushing sound.

Leslie Johnson grabbed cash from the bedroom and also ran to the basement and grabbed more cash. "Put in your bra and walk out or something, I don't know what to do, Jack said.

"I have it in my bra," his wife replied.

"FBI agents then searched the person of Leslie Johnson incident to her arrest and recovered $79,600 in U.S. currency from her underwear," the affidavit says.

The wild ending may end up costing the Johnsons. The FBI says there is probable cause to believe that the pair "tampered with ... evidence and engaged in destruction, alteration, and falsification of records in a federal investigation."

The FBI document does not say how much money Johnson may have received in kickbacks or bribes. It does say at least some of the funds involved were targeted from an $80 million dollar budget to programs supported by federal grants such as those from Department of Housing and Community Development.