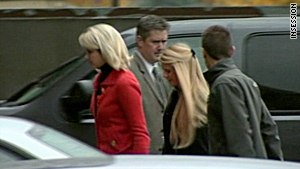 Elizabeth Smart, left, arrives for court Monday in Salt Lake City, Utah. She is scheduled to testify this week.

Read more about the trial from CNN affiliates KSTU and KSL.

Salt Lake City, Utah (CNN) -- Shortly after he was arrested in March 2003 and charged with kidnapping Elizabeth Smart in the dark of night, self-styled prophet Brian David Mitchell wrote that God intended for her to be at his side as he battled the Antichrist and restored the true Mormon faith to its rightful place.

This was her destiny, he said, adding all of these words to his religious manifesto, "The Book of Immanuel David Isaiah."

Federal authorities say the acts Mitchell described were the very ones he'd already taken: kidnapping Smart, tying her to a cable and humiliating her. If convicted of kidnapping and unlawfully taking a minor across state lines for sex, Mitchell, 57, could spend the rest of his life in prison.

His trial on those charges is continuing here before U.S. District Judge Dale A. Kimball. Defense attorney Parker Douglas will mount an insanity defense.

Elizabeth Smart will take the stand

Mitchell's story is heavily steeped in religious beliefs influenced by fundamentalist Mormon groups that embrace plural marriage -- a practice that was banned by the mainstream Church of Jesus Christ of Latter-day Saints more than a century ago.

According to court documents, Mitchell told his legal wife, Wanda Barzee, that he'd had a revelation from God on November 23, 2000. Plural marriage would be restored. And Mitchell, as Immanuel, would take seven new brides between the ages of 10 and 14. Barzee would be Mitchell's queen, called "Hephzibah."

Elizabeth Smart was the first of the child brides, authorities say. In a hearing last year, she testified that Mitchell told her during her captivity that he was a Davidian King who would emerge in seven years, be stoned by a mob, lie dead in the streets for three days and then rise up and kill the Antichrist.

In "BIDI," as his book is called, Mitchell wrote that the Holy Spirit convinced Elizabeth, then 14, to open her bedroom window for him in June 2002 and compelled her family to turn off their security system. And, he wrote, Elizabeth "did rise from her bed and did come forth upon hearing her Lord's command, for she knew in her heart ... that to disobey would cause the loss of great and eternal blessings for herself and her family."

Smart has testified that she was responding to other forces. She said Mitchell, who had worked as a handyman for her parents, held a knife to her throat and threatened to kill her and her family if she cried out or ran. She said he was "wicked, manipulative, sneaky, slimy, selfish, greedy, not spiritual, not religious, not really close to God."

She told authorities that he used religion to get what he wanted. "Whenever he wants anything, that's when he gets a revelation," she said. She recalled a revelation that told him he could smoke and drink.

Smart was eagerly awaiting her graduation from junior high school when she was taken from her home before dawn on June 5, 2002 -- the day Mitchell told Barzee he would "go forth and obtain a wife." Smart told authorities she was marched into the hills behind her home and forced to strip off her red pajamas and don a religious robe. She was then "sealed" to Mitchell in a brief ceremony he performed in a tent and, she said, raped by him.

She was raped daily, she testified, sometimes three or four times a day. To Smart, he seemed more obsessed with sex than religion.

Although Mitchell wrote that her "false traditions were truly the only bonds she wore," Smart has testified that he attached a lock to her ankle. It was linked to a 10-foot cable that was attached to another 15-foot cable tethered between two trees.

She said she was given a bucket for a toilet and plied with drugs and alcohol to lessen her resistance. Once, she said, she became sick and slept face-down in her own vomit. She said Mitchell told her she must be humbled before she could be exalted.

Three days after she was abducted, Smart said, she heard the voices of people searching for her. She later told authorities she did not respond to their calls because Mitchell threatened to kill her and her family. Mitchell, however, wrote in his manifesto that she kept silent with tears in her eyes "because she knew the great sacrifice the Lord God Almighty had called upon her to make."

Their conflicting versions of events lie at the heart of a trial that will explore themes of sex, abuse, religion and mental illness. Ultimately, it will be up to jurors to decide whether Mitchell was a delusional religious zealot -- insane and therefore not responsible for his actions -- or a sadistic sexual predator who used religion as a way to control others and justify his actions.

Mitchell was initially charged in Utah's state courts, but in July 2005 he was found mentally incompetent to stand trial.

Federal authorities indicted him in March 2008. The federal charges stem from the allegation that he took Smart across state lines to a homeless camp in California during the nine months she was with him.

The issue of Mitchell's mental competency -- his ability to understand the charges against him and assist in his defense --was raised again in federal court. In his second competency hearing, more experts were consulted and civilian witnesses testified, including Barzee, some of Mitchell's other family members and Elizabeth Smart.

A professor from Brigham Young University testified that some of Mitchell's ideas, which on the surface might seem delusional, are logical when considered in the cultural context of the beliefs of the groups with which Mitchell associated.

Kimball found Mitchell mentally competent to stand trial in May. He pointed out that witnesses who dealt with Mitchell during his confinement, first at Utah State Hospital and later in prison, testified that he now seems more obsessed with reruns of the television show "Charmed," about "good" witches battling the forces of evil, than with religion.

"There is no question that Mitchell has always had a keen interest in religion," Kimball wrote in his opinion. "He used religion to provide a basis for things he wanted -- to control his stepchildren, to manipulate Barzee and Elizabeth, to justify his carnal desires. However, the evidence does not support the conclusion that he has been 'preoccupied' with religion to a pathological degree."

The following biography of Mitchell is drawn from the judge's 150-page written opinion, which was based on witness testimony at the competency hearing, police investigative files and experts' reports -- and tells Mitchell's life story in vivid, sometimes disturbing, detail.

Mitchell was born in 1953 to Shirl and Irene Mitchell, a social worker and a high school teacher. He had five siblings, and the children were raised as Mormons. As he grew older, Mitchell was influenced by his father's "eccentric" religious beliefs. Shirl Mitchell called his own 1,066-page tome "Spokesman for the Infant God and Goddess."

Brian Mitchell was referred to juvenile authorities at age 15 for being "cruel and sadistic" to his mother and siblings. No signs of serious mental illness were noted. He dropped out of high school at age 16 and got his girlfriend pregnant. The couple had two children, and Mitchell dabbled in drugs.

After they split up, she got custody of the children in 1977, but he took them to West Virginia, where he lived with a Hare Krishna group. Later, in 1983, he placed the children in foster care, passing a mental health evaluation in the process.

Mitchell was 26 when he returned to Salt Lake City. He stopped taking drugs and married a second wife, Debbie. He worked as a die cutter and returned to the Mormon Church. But behind closed doors, there were troubling incidents of abuse. Debbie Mitchell was afraid of mice, and one day he brought a mouse home in a jar. On another occasion, he laid out 50 dead mice on a cookie sheet and left it in the oven for her to find.

Mitchell divorced Debbie amid allegations he had sexually abused her young son and daughter from a previous relationship. He married Wanda Barzee on the same day in November 1985 that his divorce became final.

Soon afterward, he started to refer to himself as a prophet. Dissatisfied that he wasn't advancing quickly enough in the church, he began associating with fundamentalist groups.

Barzee's daughter, then 12, came to live with them in 1986. The girl left two years later after Mitchell and Barzee served her pet rabbit to her for dinner, telling her it was chicken.

"I kind of remember Brian gloating about the fact" that the girl "didn't even know she was eating a rabbit," Barzee recalled on the witness stand at Mitchell's competency hearing. "I remember how upset [she] was when she found out the rabbit was killed, that she'd actually eated it, ate it." Michell later bragged to co-workers that he shot the family dog in the head because the children weren't taking care of it.

By the 1990s, Mitchell was talking seriously about quitting work, not paying taxes and living "off the grid." He grew out his hair and beard, donned religious robes and, looking like a modern-day Moses, began panhandling in the Salt Lake City streets.

He and Barzee spent time with a Patriot group in Idaho and then traveled the country for two years, stopping off at key sites in Mormon history before returning to Salt Lake City. They lived with a fundamentalist group in Orem, Utah, and moved back and forth between the homes of her parents and his.

In 1999, Mitchell met a 19-year-old woman who had escaped from a polygamist compound in Kingston, Arizona. By 2001, he was determined to take her as a plural wife, even if she was already engaged to another man. He suggested she sell the engagement ring and "we could live off it nicely for a few months."

The woman turned him down and Mitchell began to talk about "plundering" young women for plural marriage. He delivered his tome, the "BIDI," to Barzee and his family on April 6, 2002, laying out his destiny as a king with seven wives, plus one.

Some family members dismissed it as Mitchell being Mitchell. But the Mormon church, which obtained a copy, saw it as grounds for excommunicating him. And when his mother refused to accept his manifesto, he reacted violently. She ordered him out of the house and obtained a restraining order.

A few days after his excommunication became final, Smart vanished from her bedroom in the middle of the night.

In Session's Jean Casarez contributed to this story.