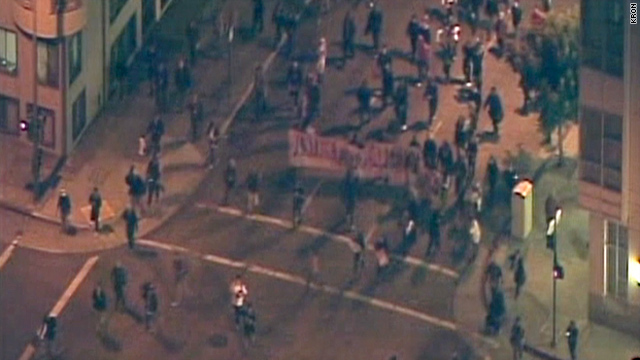 Los Angeles, California (CNN) -- Authorities in Oakland, California, said unruly marchers were "tearing up the city" as they protested a two-year sentence for a former transit police officer convicted for killing an unarmed man.

It started out as a peaceful and organized expression of grief, but by nightfall, a small number of people acted out in a violent manner, he said.

Somoeone ripped a gun from a police officer's holster, and another officer was hit by a car, according to Batts.

"I want to be clear that people have a right to assemble, a right to protest and a right to free speech," the police chief said.

"But people do not have a right to tear this city up. Oakland already has a lot of pain, and it's not fair. This city has been torn up too many times."

At least 152 people were arrested, according to Oakland police spokesman Officer Jeff Thomason.

They face charges of unlawful assembly and failure to disperse, Batts said.

The group marched down several streets and broke an agreement on what streets to rally on, Batts said.

Protesters Friday broke windows and jumped on vehicles, Batts said. He estimated the crowd at between 300 and 500 people.

The shooting was captured on a bystander's cell-phone video camera, and the video was widely circulated on the Internet and on news broadcasts. It spurred several protests and riots in and around Oakland.

Mehserle is white and Grant was African-American.

Grant's mother said her son and other African-Americans have too long been the victims of police abuse and a biased judicial system.

The trial had been moved from California's Alameda County to Los Angeles because of pretrial publicity.