From Jim Kyle, In Session 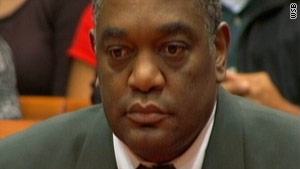 Derrick Yancey's defense said he killed a day laborer in self-defense after he shot his wife in a botched robbery.
STORY HIGHLIGHTS
RELATED TOPICS

Decatur, Georgia (CNN) -- A former Georgia sheriff's deputy was found guilty Wednesday of murder in the shooting deaths of his wife and a day laborer.

A Dekalb County jury deliberated for about 22 hours before convicting Derrick Yancey, 49, of two counts of malice murder and two counts of possession of a firearm during the commission of a crime in the June 9, 2008, killings of Linda Yancey, 44, and Marcial Cax-Puluc, 23.

Yancey was apprehended on Sept. 21, 2009, in Punta Gorda, Belize, where he had fled after escaping house arrest.

However, over the course of four days of testimony from almost 40 expert witnesses, neighbors and family members, DeKalb County Prosecutor Don Geary convinced jurors that Yancey instead hatched a plan to shoot his wife in the basement of their Stone Mountain home and then implicate Cax-Puluc, whom he had picked up at a nearby gas station frequented by men looking for day work.

Linda Yancey's family listened with little visible reaction to the reading of the verdict.

Yancey faces a possible life sentence when is semtenced, which is scheduled to take place over the next several weeks.