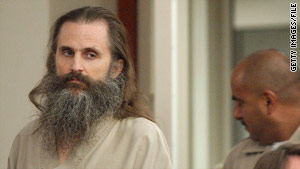 Brian David Mitchell is seen a 2004 court appearance. He is accused of kidnapping Elizabeth Smart in 2002.
STORY HIGHLIGHTS

(CNN) -- More than eight years after a Utah teenager disappeared from her bedroom on a summer night, the man authorities believe masterminded her kidnapping is set to stand trial in federal court.

Brian David Mitchell, 57, is accused of snatching then-14-year-old Elizabeth Smart at knifepoint from her family's Salt Lake City home on June 5, 2002 -- a crime that shocked the nation and the city, which was then basking in the glow of the 2002 Olympic Winter Games a few months earlier.

Mitchell faces federal charges of kidnapping and transporting a minor across state lines for improper purposes. Jury selection in his trial is scheduled to begin Monday in Salt Lake City.

In the months that followed Smart's disappearance, her anguished parents, Ed and Lois, became a familiar sight in the media as they continued to plead for their daughter's safe return.

But no one expected what happened in March 2003, when Smart was found walking down a street in the Salt Lake City suburb of Sandy in the company of Mitchell and his wife, Wanda Eileen Barzee. Mitchell, a drifter and self-described prophet who called himself "Emmanuel," had done some handyman work at the Smarts' home.

Utah prosecutors charged Mitchell with six felony charges of kidnapping, sexual assault and burglary. But in July 2005, a Utah district court judge ruled him incompetent to stand trial, leaving him in custody at the Utah State Hospital.

However, the state case against Mitchell was put on hold when federal authorities stepped in. A grand jury in 2008 indicted Mitchell and Barzee. U.S. District Judge Dale Kimball found Mitchell competent to stand trial in March.

As part of her plea agreement, Barzee agreed to cooperate in the state and federal cases against her husband. However, her name does not appear on a witness list filed by federal prosecutors -- and does appear on a list of witnesses filed by the defense.

Smart, her mother and her younger sister, Mary Katherine -- who was sleeping in the room with Smart the night of the kidnapping and was the only witness -- all appear on the prosecution's witness list.

Mitchell's attorneys attempted to move his trial, saying it should be held outside of Utah because publicity in the case had prejudiced the pool of potential jurors against him and jeopardized his right to a fair trial.

Kimball denied that request in August, and defense attorneys appealed his ruling to the 10th U.S. Circuit Court of Appeals in Denver, Colorado. A three-judge panel on the appeals court denied the request last week, saying it was premature since jury selection had not taken place.

"It is possible that a jury could be seated where all the jurors would satisfy Mr. Mitchell's view of impartiality," the 10th Circuit ruling said.

Defense attorneys in July said in court documents that they intend to utilize an insanity defense and intend to introduce expert testimony relating to an alleged mental disease or defect.

Now 22, Smart testified as part of Mitchell's competency hearing last year that after taking her -- still dressed in her red pajamas -- from her home, Mitchell took her to a wooded area behind her home and performed a mock marriage ceremony with her before sexually assaulting her. She testified he repeatedly assaulted her during her months in captivity, and that he and Barzee took her to California before returning with her to Utah.

The federal court summoned 600 jurors to fill out a preliminary juror questionnaire in the case, according to court documents. About 500 potential jurors attended the sessions on September 30 and October 1. Some were released on hardship grounds, the documents said, but about 330 jurors completed the questionnaire.

Kimball narrowed that number down to slightly more than 200 potential jurors, according to The Salt Lake Tribune newspaper.