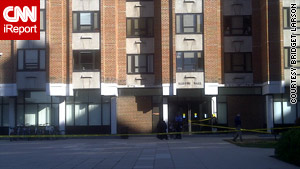 Georgetown University's Harbin Hall was evacuated part of Saturday after the discovery of chemicals there.
STORY HIGHLIGHTS
RELATED TOPICS

Washington (CNN) -- Authorities have arrested two Georgetown University students and another person in connection with a suspected drug lab found inside a dormitory Saturday morning, the Metropolitan Police Department said.

The three males, each at least 18, face charges of possession of drug paraphernalia, said Officer Hugh Carew, a spokesman for the police department. The third individual was a campus visitor. None was identified.

Police said that shortly before 6 a.m., they received a call about a foul odor at Georgetown's Harbin Hall.

Initially, police thought the lab was for producing meth but later said it was used to make Dimethyltryptamine, a hallucinogenic drug commonly known as DMT.

DMT is classified as a Schedule 1 drug, meaning it has no accepted medical use for treatment of any kind in the United States. Federal trafficking of Schedule 1 drugs carries a maximum prison sentence of 20 years, said Rusty Payne, a Drug Enforcement Administration spokesman.

DMT is a hallucinogenic that can be produced synthetically, but it also comes from a variety of plants and seeds found in South America, Payne said. The substance can be sniffed, smoked or injected, giving the user a short high sometimes referred to as a "business man's trip" because it lasts about an hour.

In addition to the charges of drug paraphernalia possession, the men arrested could also potentially face federal drug trafficking charges if anything more serious is uncovered by the DEA's investigation, Payne said.

Harbin Hall was evacuated most of the day following the discovery of the suspected lab. Medical personnel evaluated seven people, including two security officers, at the scene, said fire department spokesman Pete Piringer

No injuries were reported, and the DEA determined that the chemicals used in the suspected lab posed no health risk to students in the dorm.

"The DEA has informed us that there was never a health risk to students in Harbin, including those on the same floor, beyond those who lived in the room," Todd Olson, vice president of student affairs, said in a statement to Georgetown students and faculty. "Hazardous materials experts have now removed all potential contaminants."

Olson said: "The use, production and distribution of illegal drugs are issues we take very seriously and are violations of the student code of conduct. MPD [Metropolitan Police Department] has arrested three individuals, two of whom are Georgetown undergraduates. They remain in police custody."

Both the DEA and university ask that anyone with information in connection with the incident contact the DEA Washington office, or Georgetown's Department of Public Safety at 202-687-4343.