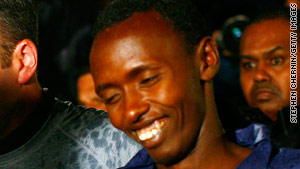 Abduwali Abdukhadir Muse said he did not recognize the U.S. flag on the Maersk Alabama at the time of the hijacking.
STORY HIGHLIGHTS
RELATED TOPICS

(CNN) -- Sentencing was delayed Tuesday for a Somali pirate who prosecutors say led the attack on a U.S. vessel off the coast of Africa last year.

The sentencing hearing for Abduwali Abdukhadir Muse was adjourned until a later date. No reason was immediately provided by the court or prosecutors for the delay.

Muse has pleaded guilty to charges he hijacked the ship and kidnapped its captain.

Prosecutors say Muse acted as the ringleader when he and three other men seized the U.S-flagged Maersk Alabama by force about 350 miles off the coast of Somalia on April 8, 2009.

Once on board, the armed men demanded the ship be stopped, then took a lifeboat and held the captain of the ship, Richard Phillips, hostage on it.

When he entered his plea on May 18, Muse apologized for his actions and blamed the incident on the Somali government.

"What we did was wrong. I am very sorry for all of this," Muse said in a soft voice. "All of this happened because of the government in Somalia."

In addition to the Maersk Alabama, Muse was charged with participating in the hijacking of two other vessels in late March and early April of 2009. Muse told the court that he and the three other men agreed to "capture any ship that came by." He added that he did not recognize the U.S. flag on the Maersk Alabama.

Muse and his cohorts held Philips hostage for four days on the lifeboat. The USS Bainbridge, a U.S. Navy destroyer, came to the assistance of the vessel, and in radio communications, the pirates threatened to kill Phillips if they were not guaranteed safe passage away from the scene, authorities have said.

Four days after the hijacking began, Muse boarded the Bainbridge and demanded safe passage for himself and the others in exchange for Phillips' release, according to a criminal complaint.

While he was away from the lifeboat, Navy SEAL snipers shot and killed the three remaining pirates, authorities said. Muse was then taken into custody.

Muse could receive a maximum sentence of almost 34 years behind bars.

CNN's Hussein Saddique and Cheryl Robinson contributed to this report.