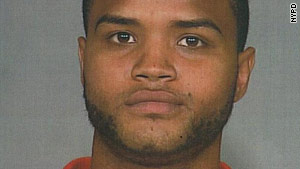 Police on Saturday identified the suspect who remains at large as 22-year-old Ruddy Vargas-Perez.
STORY HIGHLIGHTS

New York (CNN) -- The last of nine named suspects in a series of anti-gay beatings is "just appalled" by the attacks and had nothing to do with them, his lawyer said Monday after the man surrendered to police.

Ruddy Vargas-Perez, 22, was taken into custody late Monday afternoon, according to the New York Police Department. Eight other men were arraigned Sunday in the Bronx, where all nine live.

The case involved three victims being held against their will by as many as nine assailants who beat them in a vacant apartment and sodomized two of them, New York Police Commissioner Ray Kelly said Friday. A fourth victim was beaten and robbed in connection with the attacks, which New York Mayor Michael Bloomberg described as "torture."

Ruddy faces arraignment Tuesday. Of the other eight suspects in the attacks, six have been ordered held without bail. A judge set bail for the remaining two suspects at $100,000, the borough's district attorney's office said Sunday.

The teenager was forced to hit the older male several times in the face and burn him with cigarettes, after which the suspects assaulted him with their fists and a chain and sodomized him with a small baseball bat, the commissioner said. The 30-year-old man was later dumped outside his home, he added.

All nine of the suspects live in the Bronx, police said. The hate crimes task force took over the investigation, Kelly said, and coordinated with the Bronx Gang Division and Bronx Special Victims Squad to help identify and capture the suspects. Pending charges against them include unlawful imprisonment, abduction, sodomy, assault, robbery, and menacing, all as hate crimes, the commissioner said.