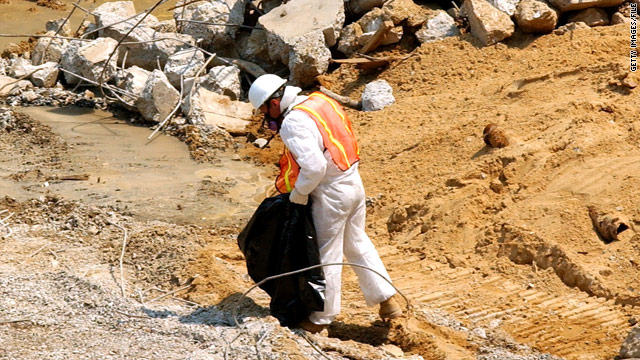 Washington (CNN) -- The Supreme Court has rejected efforts by some families of 9/11 victims to ensure material from the fallen World Trade Towers is treated respectfully because it could contain ashes of those who perished in the terrorist attacks.

The justices opened their new term Monday, issuing orders in several thousands cases that had piled up over their three-month summer recess.

Among the cases was a lawsuit against New York City officials who were responsible for transporting an estimated 1.65 million tons of scrap material and debris from the site in lower Manhattan. Lower federal courts had turned aside a lawsuit against the city.

City officials said they went through 10 months of painstaking hand and mechanical sifting of the material for any signs of human remains and personal belongings before the material was shipped to a Staten Island landfill.

Family members claimed about 223,000 tons of the material was never screened -- or wasn't screened properly -- and a landfill is not a proper resting place for possible victims of the worst domestic terror attack in U.S. history. They wanted a more thorough processing of material, and better accounting of what work was conducted.

The process of identifying human remains continues in the city medical examiner's office, but court records show no remains have been uncovered or yet identified for about 1,100 of the 2,752 people killed at the site on September 11, 2001.

The Supreme Court also is staying out of an ongoing dispute over whether the Obama administration should turn over documents relating to the government's alleged wiretapping of attorney-client conversations involving suspected terrorists.

The justices without comment decided not to explore the larger national security and privacy implications raised in the appeal.

The National Security Agency had begun a warrantless surveillance program shortly after 9/11 to monitor suspected terrorist activity in the United States. The program was kept secret until December 2005. The Justice Department, citing executive privilege and national security concerns, has refused to say whether any specific records sought by the private attorneys ever existed.

A federal court agreed, concluding confirming or denying such material "would reveal information about the NSA's capabilities and activities."

The Center for Constitutional Rights, which filed the lawsuit, expressed disappoint at the high court's refusal to get involved now in the case.

"The Obama administration has never taken a position -- in this or any of the other related cases -- on whether the Bush administration's NSA surveillance program was legal. In this case they claimed that even if it was illegal, the government has the right to remain silent when asked whether or not the NSA spied on lawyers," said Shayana Kadidal, a Center for Constitutional Rights attorney. "Today the Supreme Court let them get away with it."

Civilian attorneys say their job defending accused enemy combatants and other prisoners held in Guantanamo has become harder because of the threat of electronic surveillance. They say witnesses and family members of detainees have been afraid to talk, worried the federal government may be listening in.

In a separate appeal, the justices moved a step closer to hearing a case over alleged torture of Iraqi prisoners by U.S. military contractors.

In a brief order Monday, the high court asked the Obama administration for its views on a private lawsuit filed by 26 former prisoners of the notorious Abu Ghraib prison in Baghdad. At issue is the level of liability by private companies that contract with the federal government, especially involving alleged human rights violations committed overseas or in a war zone.

The Iraqi civilian inmates claim employees of two private U.S. firms assaulted, tortured, and sexually humiliated them while they were in custody. The alleged abuses included rape and exposure to extremes in temperature. The plaintiffs also claim fellow prisoners not named in the lawsuit were murdered by their American captors.

Plaintiffs seek financial relief under the Alien Tort Statute, which dates to 1789, and local District of Columbia law.

The Abu Ghraib facility run by the U.S.-led coalition was at the center of international outrage and embarrassment in 2004 after photos showed American military guards smiling while mistreating and humiliating Iraqis. Several soldiers were later put on military trial.

The high court will decide in coming weeks whether to accept this appeal for review. If it does, oral arguments would be held early next year. The case is Saleh v. CACI International (09-1313).