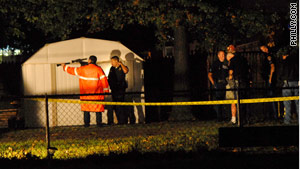 Police in Pennsauken, New Jersey, shot and killed a father suspected of killing two of his sons.
STORY HIGHLIGHTS

Read more about this story from CNN affiliate Philly.com

Police were called to a home in Pennsauken about 10:30 p.m. Thursday and found the home on fire, said Jason Laughlin, a spokesman for the Camden County Prosecutor's Office.

Officers found the 54-year-old father in the back of the home holding a gun, a lighter and a can of gasoline, Laughlin said.

The man charged the officers, who shot and killed him.

The man's 14-year-old and 18-year-old sons were found dead from gunshot wounds. One was in the street while the other was in the burning home.

The other son,16, was also shot and critically wounded.

The father was identified as Alfred Moton.

Prosecutors were still trying to determine what caused the shootings, Laughlin said.