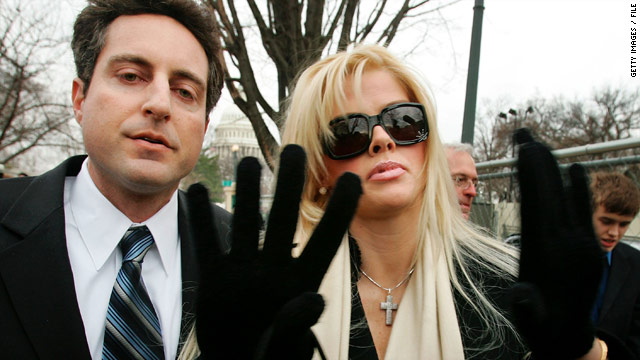 The Supreme Court is taking a second look at its ruling in the late Anna Nicole Smith's estate dispute.
STORY HIGHLIGHTS
RELATED TOPICS

Washington (CNN) -- The Supreme Court has agreed to take another look at the long-standing dispute over the estate of the late actress/model Anna Nicole Smith's billionaire husband.

The justices Monday accepted review of the probate case after a federal appeals court ruled against Smith's estate. Oral arguments will be held early next year.

J. Howard Marshall was married to the much younger Smith, who is named in court papers by the name Vickie Lynn Marshall, for 14 months before he died in 1995. His will left nearly all his assets and trust to his son from a previous marriage, E. Pierce Marshall, and Smith received nothing. She later sued, claiming her elderly husband promised to give her more than $300 million.

Despite the colorful details contained in the legal briefs, the issue for the Supreme Court remains fairly pedestrian. The justices will decide whether Smith's estate received a proper hearing in federal courts, and whether state probate courts should be the proper venue for hearing such cases. The so-called "probate exception" normally keeps federal courts from hearing such disputes, but there is no congressional law mandating the hands-off approach.

Smith, a onetime Playboy and jeans model, reality TV star and diet company spokeswoman, went to both state and federal courts to press her claims. The Supreme Court is not expected to delve into matters raised in past legal proceedings: whether document tampering happened, whether Smith was kept from her husband's bedside as he was dying, and how the money should be divided.

Howard Marshall, a Yale-educated businessman, was 89 in 1994 when he married the then-26-year-old Texan. They had met a few years earlier at a strip club where she worked. Marshall died about a year after the wedding, but Smith, according to legal briefs filed with the high court, was not given a share of the estate in the will or separate trust.

Marshall's son, Pierce, died in 2006 and Smith died of a drug overdose the next year, leaving behind a young daughter from a later relationship. That has created the unusual scenario of two estates now fighting over the still-frozen assets of another estate.

State and federal courts have disagreed over the years whether Smith should receive any part of the money. A U.S. bankruptcy judge initially awarded her $474 million, which later was reduced to about $90 million. A federal appeals court has since twice dismissed Smith's case. A state probate court also dismissed her claims, saying Pierce Marshall was the sole heir.

Leading the fight on behalf of Smith is Howard K. Stern, her attorney and onetime boyfriend. Stern is currently on trial in Los Angeles, California, for allegedly conspiring to feed Smith's drug addiction and using false names to obtain the drugs. He and two doctors charged as co-conspirators have denied wrongdoing, and the case could go to the jury next week.