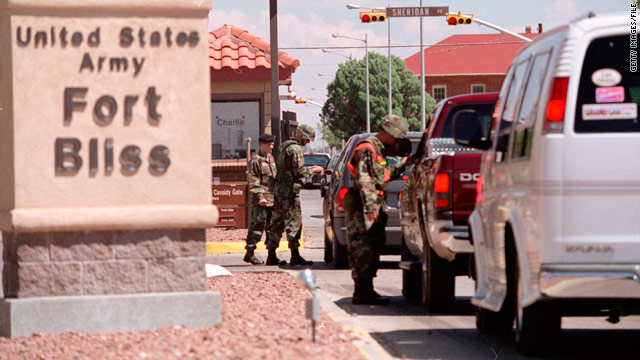 The FBI described the shootings at Fort Bliss, Texas, as "an isolated criminal incident and not terrorism-related."
STORY HIGHLIGHTS

(CNN) -- The man killed after he allegedly shot two women -- one fatally -- at a convenience store at Fort Bliss, Texas, was identified Tuesday as a retired Army sergeant.

The Federal Bureau of Investigation said the motive for Monday's shootings is unclear. "It has been determined this was an isolated criminal incident and not terrorism-related," the agency said.

It was not known whether the shooter had any relationship with either of his victims.

He was identified as Steven Kropf, 63, of El Paso, Texas.

The gunman entered the busy Shopette Convenience Store on the post around 3 p.m. and shot the two civilian employees in a rear office. An Army guard shot Kropf, who had left the store and was in a vehicle in the store's parking lot, authorities said.

Fort Bliss is located close to the Mexican border near El Paso, Texas, but straddles the Texas-New Mexico border. Most of the base is located in New Mexico, but the main headquarters is in Texas. President Barack Obama visited there last month to meet troops and mark the end of the official combat mission in Iraq.

Although Fort Bliss is one of the safest Army installations, Pittard said, the post is "going to take a good look at our privately owned weapons policies." He indicated officers will conduct more random checks of motorists to see if they are bringing weapons.