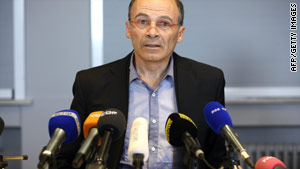 (CNN) -- The Catholic Church in Belgium released an independent report Friday detailing hundreds of assertions of sexual abuse of children by clergy and others working for the church from the 1950s into the late 1980s.

"We can say that not a single congregation escaped sexual abuse of minors by one or more of its members," said the Commission on Church-Related Sexual Abuse Complaints, which was led by Dr. Peter Ariaenssens, who is both a church investigator and psychiatrist.

Investigators had information about when the abuse started for 233 of the alleged victims. Forty-eight were 12; one was 2; five were 4; eight were 5; seven were 6; 10 were 7.

At the other end of the scale, five alleged victims are aged between 80 and 90 years old and one is older than 90.

All of the alleged abusers were men.

The committee said none of the alleged cases had occurred recently.

Pope Benedict XVI has repeatedly said the Vatican will seek justice for victims. Over the summer he said that the church must promise "to do everything possible" to ensure that the sexual abuse of children by Catholic priests "will never occur again."

Benedict said the church must "insistently beg forgiveness from God" and from victims for the sexual abuse committed by Catholic priests, and that priests must be more thoroughly vetted before joining the ministry.