No arrests yet in theft of gold bar from museum 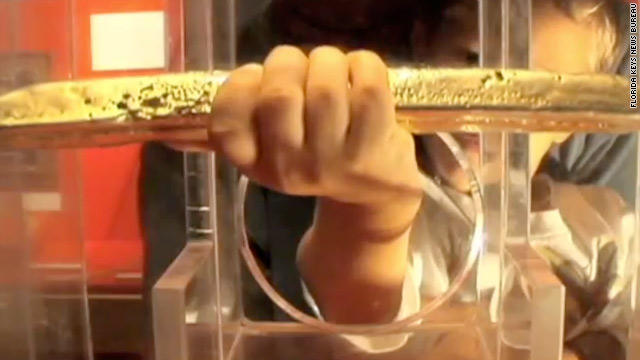 (CNN) -- Authorities Friday were checking fingerprints and clarifying video images showing the theft of a $550,000 gold bar from a museum in Key West, Florida.

For 25 years, visitors to the Mel Fisher Maritime Museum in Key West, Florida, had the opportunity to lift the glittery piece of treasure in a special display case.

"It was touching something that came off the ocean floor," said Melissa Kendrick, the museum's executive director.

On Wednesday, two thieves got the gold bar and walked out, having accomplished their brazen theft in just a few minutes, Kendrick said.

Key West Police and the FBI are trying to identify the two men who walked into the gallery room around 5:10 p.m. No visitors or security guards were present, but a video camera was.

Detectives believe one of the men served as a lookout in the small gallery room, she said. Investigators also are looking at fingerprints on the display case, but they may be of visitors unconnected to the heist.

The bar was recovered by treasure hunter Mel Fisher and his crew in 1980 from the shipwreck of the Santa Margarita, which sank 25 miles west of Key West. The Santa Margarita is the sister ship of the storied galleon Atocha, also worked by Fisher.

Between them, the vessels carried 250,000 silver coins, according to the museum. They went down during a storm.

Crean said the case has generated a lot of interest. "Mel Fisher was such a dream builder," she said.

"Having the money [insurance] in its place would not be a winner for me," Kendrick told CNN on Thursday night.

Fisher, who died in 1998, loved having the bar in a special reach-in case because it allowed visitors to make a connection with the find, Kendrick said.

The director said the bar, if recovered, will be returned to the case -- with a few security modifications.

Police said the modern-day pirates might find it difficult to sell the gold bar.

"I remain optimistic" about its recovery, Kendrick said.