(CNN) -- Shaquan Duley made a tearful first appearance Wednesday in a South Carolina courtroom to face murder charges in the deaths of her two toddler sons, her lawyer said.

Handcuffed and dressed in orange jail coveralls, Duley sniffled and sobbed through her arraignment, which lasted less than three minutes. She entered no plea to the charges, and no date was set for her next appearance.

Duley faces two counts of murder in the deaths of her two sons, 1-year-old Ja'van Duley and 2-year-old Devean Duley. Investigators said Duley, 29, was unemployed, single and apparently fed up with criticism from her mother when she smothered her children, strapped their lifeless bodies into car seats and submerged her car in the Edisto River.

Her lawyer, Carl B. Grant, described her as "distraught" and said she was "extremely sad and tearful" during the proceedings.

"She had a solemn attitude and was crying before she entered court," Grant said. He said he has not yet seen the full case against Duley, but added, "I can assure you there is more than has been said and reported by anyone."

Before the appearance, Grant said that if his client was asked to enter a plea, it would be "not guilty." Duley's mother, other relatives and members of her church attended to show their support during the arraignment, Grant said. 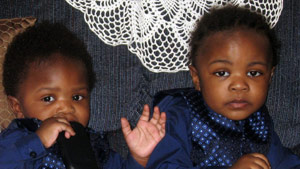 The boys' bodies were discovered early Monday after witnesses reported Duley's car had gone into the Edisto River outside Orangeburg, about 75 miles northwest of Charleston. Orangeburg County Sheriff Larry Williams told reporters Duley had no means of taking care of her children.

Mother and daughter argued the night before the children's bodies were found in Duley's Chrysler sedan, Williams said.

"We believe this is a direct response (to the argument) from Ms. Duley," he said. "I believe she was just fed up with her mother telling her she couldn't take care of the children, and she wasn't taking care of her children, and she just wanted to be free."

However, he said, "this wasn't a hardened criminal. This was a young lady in trouble, in trouble in more ways than she realized."

Duley has no previous criminal history, he said. Her third child, a 5-year-old daughter, was at the home of Duley's mother at the time of the deaths and did not appear in court Wednesday.

Duley told authorities she smothered the boys by putting her hand over their mouths at the Trumps Inn in Orangeburg, Williams said. Then she drove them to the river while "trying to find a way to discard the bodies," he said.

"She just wanted to get rid of the children, as sad as it may be," Williams said.

Authorities do not know how long the boys had been dead before they went into the water, he said.

Duley first reported that she had lost control of the car, and it had rolled into the river. But authorities believed her story didn't add up from the beginning, Williams said. Her clothes were dry, he said, and there were no skid marks or other indications of an accident at the scene.

Authorities responded to a report of a car accident near a boat landing on the river Monday, and divers found the children's bodies. Williams described Duley as distraught, but said she showed no signs of remorse.

"I don't believe she woke up and said, 'I'm going to the Shillings Bridge Road to get rid of my children,' " he said. "Of course, that hasn't been determined. I believe she was just angry, upset and for some reason found the boat ramp, but mind you the children were deceased ... so (she was) trying to find a way to discard the bodies."

The father of the two children has not been found, Williams said. Duley "was more or less being mother and father for the children," he said.

The S.C. Department of Social Services has no record of prior involvement with Duley, department spokeswoman Marilyn Matheus said.

The incident has striking similarities to a 1994 case, also in South Carolina. The bodies of Michael Daniel Smith, 3, and 14-month-old Alexander Tyler Smith were found in their mother's car, still strapped into their car seats, in a lake in the town of Union.

Their mother, Susan Smith, was convicted on two counts of murder, but jurors spared her the death penalty and sentenced her to life in prison.