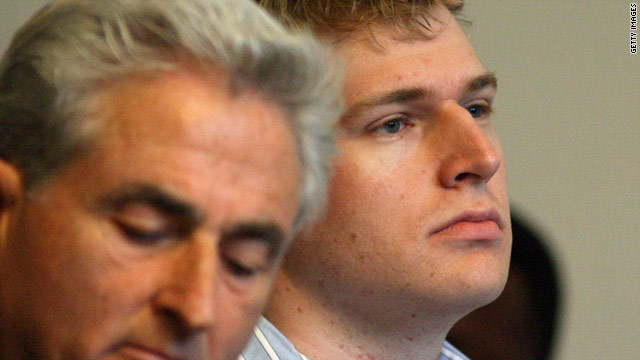 (CNN) -- Accused "Craigslist killer" Philip Markoff wrote his ex-fiancee's name in what appeared to be blood on the wall of his jail cell before dying "at his own hand," a Massachusetts prosecutor said Tuesday.

Markoff was found dead in his jail cell in Boston on Sunday morning, Suffolk County District Attorney Daniel Conley said. The evidence collected so far indicates the onetime medical student killed himself by cutting himself multiple times with a makeshift scalpel crafted from a pen and a piece of metal, Conley told reporters.

The words "Megan" and "pocket" were scrawled on the wall when he was found, Conley said. Megan appears to refer to Markoff's former fiancee, Megan McAllister, but investigators had not divined the meaning of "pocket," the prosecutor said.

"We're still studying that," he said.

Markoff, 24, was a second-year student at Boston University's School of Medicine when arrested in April 2009. He had pleaded not guilty. McAllister, his fiancee, maintained Markoff's innocence, but the couple broke off their engagement shortly after his arrest.

While toxicology reports are still out, "At this point we can definitively say he's responsible for taking his own life," Conley said. Surveillance video from the jail shows no one entered Markoff's private cell between the time he shut off his light early Sunday morning and the time he was found dead about eight hours later, he said.

"He inflicted a series of puncture wounds and incisions on his body, including his neck, arms, wrist and ankles," Conley said. "He hit several veins and the carotid artery in his neck. All of these wounds are consistent with suicide."

Markoff was charged with the April 14, 2009, fatal shooting and attempted robbery of Julissa Brisman, 25, at Boston's Copley Marriott Hotel. Police said that Brisman, a model, advertised as a masseuse on the online classifieds service Craigslist, and Markoff might have met her through the site.

He also faced charges in connection with robberies of women at hotels in Boston and in Warwick, Rhode Island. In the Rhode Island incident, police said, the robbery was interrupted when the woman's husband entered the room.

Conley said Markoff's death deprives Brisman's family of seeing justice pronounced, but said the evidence against the suspect was "overwhelming in quantity and substance."

"This death should not divert attention from what really happened here," he said. "It should not obscure the overwhelming evidence against Mr. Markoff by the brutality of his crime. It is in no small way the ultimate indicator of consciousness of guilt."