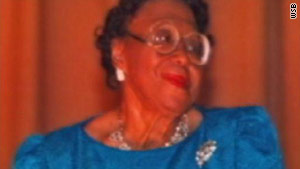 The botched raid that resulted in Kathryn Johnston's death led to a major overhaul of the Atlanta police drug unit.
STORY HIGHLIGHTS

Johnston was shot to death by narcotics officers conducting a "no-knock" warrant. Investigators later determined the raid was based on falsified paperwork stating that illegal drugs were present in the home.

The incident prompted a major overhaul of the Atlanta police drug unit, and three former police officers were sentenced to prison terms for a cover-up that ensued.

The payment represents the settlement of a lawsuit filed against the city by Sarah Dozier, Johnston's niece, Reed's office said in a statement. Initially filed in state court, the suit was moved to federal court, where a judge ordered the parties to mediation.

As the search warrant was being executed November 21, 2006, at Johnston's home, she fired at officers with an old pistol, apparently believing her home was being broken into. Six officers returned fire. Johnston's one shot went through her front door and over the officers' heads. They responded with 39 shots, hitting the elderly woman five times.

"The resolution of this case is an important step in the healing process for the city and its residents," Reed said in the statement. "As a result of the incident, several police officers were indicted in federal and state court on charges and were later convicted and sentenced for their actions. In addition, the narcotics unit of the Atlanta Police Department was completely reorganized, which included changes in policy and personnel."

All three men pleaded guilty to federal charges of conspiracy to violate civil rights resulting in death. Smith and Junnier also pleaded guilty to state charges of voluntary manslaughter and making false statements, and Smith admitted to planting bags of marijuana in Johnston's home after her death.

U.S. District Judge Julie Carnes ordered the three to split Johnston's funeral costs of $8,180, and to serve three years of supervised release after they complete their prison terms.

"I pray daily for Ms. Johnston," Smith said at the sentencing hearing, according to CNN affiliate WXIA-TV. "I also pray other officers in Atlanta will have the moral fortitude I didn't have."

Tesler was convicted on one state count of making false statements after filling out an affidavit saying that an informant had purchased crack cocaine at Johnston's home, in a crime-plagued neighborhood near downtown Atlanta.

The informant, however, denied ever having been to Johnston's home, leading to probes by federal and state authorities as well as the breakup and reorganization of the narcotics unit.

Tesler's state conviction was reversed on appeal. According to their plea agreements, Junnier and Smith will serve their state sentences concurrently with the federal sentence.

Shortly after the probe began, Junnier began cooperating with authorities, providing "valuable assistance in the investigation and prosecution of Smith and Tesler," according to a statement issued last year by federal prosecutors. Smith also cooperated to a lesser extent, and both men's sentences were reduced in exchange for their cooperation.

Prosecutors have said that officers regularly presented false information to obtain warrants and that they cut corners to make more time for lucrative side jobs providing additional security to businesses, often while on duty, and receiving cash payments.

The investigation into the botched raid also led to guilty pleas from the police sergeant in charge of the narcotics unit and another officer who admitted to extortion, authorities said.