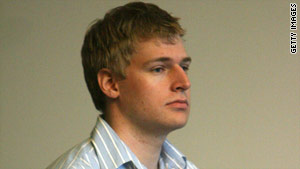 Philip Markoff is shown here at his arraignment in Boston, Massachusetts, on April 21, 2009.
STORY HIGHLIGHTS

(CNN) -- A onetime medical student who was facing charges including first-degree murder in a killing tied to the Craigslist website died Sunday of an apparent suicide, police said.

Philip Markoff was found unresponsive in his Boston, Massachusetts, jail cell at 10:17 a.m. Sunday and pronounced dead by medics, according to officials.

The cause of death is under investigation, Boston Police Commissioner Edward Davis and Suffolk County District Attorney Daniel F. Conley said in a statement.

"Markoff was alone in his cell and all evidence collected thus far indicates that he took his own life," the statement said. "Nonetheless, as with all such cases, a comprehensive investigation will be conducted to determine the facts and circumstances surrounding his death."

An autopsy is scheduled to be conducted Monday, according to Jake Wark, a spokesman for Conley.

Video: Looking back at 'Craigslist' case

Markoff, 24, was charged with the April 14, 2009, fatal shooting and attempted robbery of Julissa Brisman, 25, at Boston's Copley Marriott Hotel. Police said that Brisman, a model, advertised as a masseuse on Craiglist, a popular online classifieds service, and said Markoff may have met her through the site.

"Their grief for Jullissa is as fresh today as the day over a year ago when Markoff took Julissa away from them," said the statement issued by a representative for the family. "The long-awaited criminal prosecution was their only opportunity to confront him, and now he has taken that away as well."

He also was facing charges in an April 16, 2009, incident at a Holiday Inn Express in Warwick, Rhode Island. In that incident, police said Markoff tied up and demanded money from a 26-year-old dancer who had posted a Craigslist advertisement. The robbery was interrupted when the woman's husband entered the room, and the suspect fled after pointing his gun at the husband, according to Warwick Police Chief Col. Stephen McCartney.

Suffolk County District Attorney Daniel Conley told reporters last year that Brisman's death was "a brutal, vicious crime -- savage. And it shows that Philip Markoff is a man who's willing to take advantage of women -- to hurt them, to beat them, to rob them."

Brisman sustained blunt head trauma, and was shot three times at close range, prosecutors said. Conley said they believe the motive for her death was robbery.

Police traced the Internet communications with Brisman to an e-mail account that had been opened the day before her death, Conley said. Using Internet provider information, they found the computer was at Markoff's residence in the Boston suburb of Quincy, he said.

Authorities put the home under surveillance, Conley said, and "the case just begins to build from there."

CNN's John Branch and In Session's Beth Karas contributed to this report.