Painting stolen by Nazi now on display in New York 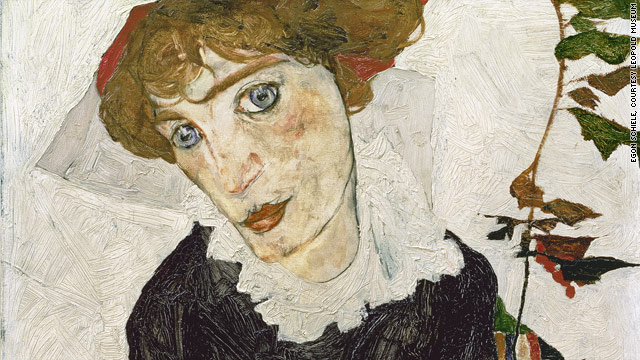 "Portrait of Wally Neuzil, 1912" painted by Egon Schiele, oil on wood, will return to the Leopold Museum in Vienna on August 18.
STORY HIGHLIGHTS
RELATED TOPICS

(CNN) -- A demure redhead in a modest black dress is making a brief appearance in New York, before finally returning home to Austria.

"Portrait of Wally," painted by Austrian Egon Schiele in 1912, was put on display Thursday at The Museum of Jewish Heritage in New York. On August 18, it will go back to the Leopold Museum in Vienna, after a settlement last week ended the painting's legal upheaval.

It's a story 70 years old, reaching across the Atlantic and involving Nazi theft, art-world deceit and a Jewish woman's deep affection for a favorite portrait.

Sometime before 1925, Austrian Jewish art collector and gallery owner Lea Bondi Jaray acquired "Portrait of Wally," according to a release from the U.S. attorney's office in New York.

In 1938, German troops occupied Austria. Nazi laws prohibited Jews from owning businesses, which made Bondi Jaray's gallery subject to confiscation. Instead, she sold the gallery to a Nazi art collector.

The collector saw "Wally" in Bondi Jaray's apartment and demanded it. She resisted, saying "Wally" was part of her private collection. Bondi Jaray's husband reminded her the Nazi could prevent their escape, so she relented and the Nazi art collector took the painting.

After World War II, the Nazi collector was arrested. "Wally" and other artwork went to the Austrian government, according to the U.S. attorney's office in New York. "Wally" found her way to the government-owned Austrian National Gallery known as The Belvedere.

Lea Bondi Jaray didn't forget about "Wally." In 1953, an Austrian art collector, Rudolf Leopold, visited Bondi Jaray in London. She asked him to recover the painting on her behalf. Instead, Leopold swapped one of his own Schiele paintings for "Wally." Bondi Jaray tried to recover "Wally," but died in 1969 before she could do so.

Leopold's art collection became the Leopold Museum in Austria in 1994. The museum loaned part of its Schiele collection, including "Wally," to New York's Museum of Modern Art in 1997.

Two years later, the U.S. attorney's office in New York said, a magistrate judge issued a warrant to seize "Wally," based on probable cause the painting was stolen property brought into the U.S. illegally.

"Wally" has been in the custody of United States Immigration and Customs Enforcement (formerly the U.S. Customs Service) since 1999.

The U.S. attorney's office in New York filed a civil complaint saying "Wally" should be forfeited and returned to its rightful owner -- Bondi Jaray's estate. The Leopold Museum argued the Nazi didn't steal the painting in the first place and Rudolf Leopold didn't know it was stolen property when he traded one of his Schieles for it.

In 2009, a U.S. District judge ruled "Wally" was Bondi Jaray's personal property, the Nazi had stolen it and it remained stolen property. The only unresolved issue was whether the museum could prove its founder Leopold, who died June 29 at 85, didn't know it was stolen.

A trial was scheduled for this week to decide that. But on July 20, the U.S. government, Bondi Jaray's estate and the Leopold Museum reached a settlement agreement. The museum in Austria is to pay the estate $19 million in exchange for "Wally."

"More than 70 years after 'Portrait of Wally' was stolen, (this) settlement marks another small step toward justice for victims of property crimes during World War II," U.S. Attorney Preet Bharara said. "Lea Bondi Jaray and her family were steadfast in their long battle. ... Their determination provides hope for others who lost precious property and art to Nazi theft." Thursday, Bharara told CNN Bondi Jaray's diligence kept the case going. "She wrote letters to her attorneys and colleagues describing the theft and her conversations with Dr. Leopold. Those very letters became critical evidence when the case was finally litigated here in New York."

After August 18, "Wally" will go home to Austria to reside at the Leopold Museum.

In the meantime, at the direction of Bondi Jaray's estate, it will be on display at the Museum of Jewish Heritage in New York.

About 50 members of Bondi Jaray's family attended the unveiling of "Wally" Thursday. The attorney for Bondi Jaray's estate says it was an emotional day for them. "The painting had a close attachment to her, therefore the painting became very closely attached to the family," said Howard Spiegler. "I think they tie the painting in with their feelings about her and feel that this essentially is the end of the quest that she started."

Her grand-nephew, Andre Bondi, thanked those who played a part in recovering the painting. "When I brought my father a copy of agent seizure warrant... he just beamed and shook his head in disbelief, that this was happening, that justice was finally being done. For me, that moving moment, exemplifies what the restitution effort is all about."

The estate chose the Museum of Jewish Heritage to host the painting because the family wanted "a setting that would memorialize the suffering of so many in the Holocaust and the resilience and resolve of those who escaped and/or survived," according to a press release from the museum.

Its director, David Marwell said, "Wally can teach us about a fundamental injustice, how the power and attraction of art and simple greed led to an egregious theft of nearly unimaginable proportions and worse. And she can teach us about justice, even justice that comes after more than seven decades, how fidelity to basic values, how bold action, how patience and persistence and perseverance and no small measure of hard work can help to get some things right."

CNN's Cassie Spodak and Lisa McClure contributed to this report.