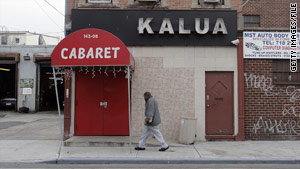 The men were shot after an altercation with plainclothes detectives outside this Queens nightclub.
STORY HIGHLIGHTS
RELATED TOPICS

New York (CNN) -- New York City will pay more than $7 million to settle a civil lawsuit brought by the estate of a man killed by police outside a Queens' nightclub in 2006 and by his two friends, who were seriously wounded, a spokeswoman for the city's Law Department said Tuesday.

The estate of Sean Bell, who was killed in the shooting, will receive $3.25 million, Joseph Guzman receive $3 million and Trent Benefield will get $900,000, said Kate Ahlers.

"The city regrets the loss of life in this tragic case, and we share our deepest condolences with the Bell family," Michael Cardozo, attorney for the New York City Law Department. "We hope that all parties can find some measure of closure by this settlement."

Accounts of the incident varied. Undercover officers, who were investigating the club regarding prostitution allegations, said they identified themselves as police, but witnesses and the wounded men said they did not. Police said they believed at least one of the men had a gun, but no gun was found. And one of the officers said the Bell, instead of obeying his command to stop, hit him with his vehicle.

The incident quickly became a touchstone for those who believe police -- in New York and elsewhere -- have a record of excessive force, particularly against black men. Bell, 23, was African-American, as were the two men wounded and two of the three police officers.

The officers fired 50 shots in just a few seconds.

The shooting sparked street protests, and Mayor Michael Bloomberg called it "inexplicable" and "unacceptable," saying "it sounds to me like excessive force was used."

In March 2007, three of the police officers were indicted on multiple charges.

Detectives Gescard Isnora, Marc Cooper and Michael Oliver -- who fired his gun 31 times that night, pausing to reload his weapon -- were acquitted of all charges in April 2008

Justice Arthur Cooperman of New York State Supreme Court said inconsistent testimony and other problems "had the effect of eviscerating the credibility" of key prosecution witnesses, and that some testimony "just didn't make sense."

"The police response with respect to each defendant was not proved to be criminal -- i.e., beyond a reasonable doubt. Questions of carelessness and incompetence must be left to other forums," Cooperman said, according to a transcript released by his office.

Citing insufficient evidence, the Department of Justice announced in February that it would not pursue federal civil rights charges against police officers involved.

The department issued a statement saying that after a "careful and thorough" review, there is not enough evidence to prove that New York Police Department detectives "acted willfully" when they opened fire on Bell and his friends.

In May, Rev. Al Sharpton led a large protest in response to the Department of Justice decision. Sharpton and Bell's fiancee and parents were among more than 200 people arrested in New York City.

Sharpton responded to Tuesday's decision in a written statement.

"This in no way mitigates or repairs the permanent damage done to them and the pain it has caused them forever nor does it diminish the outrage in the community," Sharpton said. "We will always pursue justice for the family of Sean Bell, Joseph Guzman and Trent Benefield."