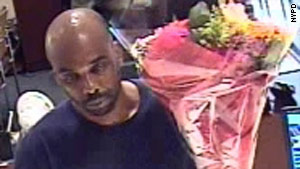 The NYPD identified Edward Pemberton, 44, as the so-called "bouquet bandit."

New York (CNN) -- Police have made an arrest in the case of the "bouquet bandit," in which a man robbed banks while wielding only a bouquet of fresh flowers and a potted plant.

Edward Pemberton, 44, was arrested Wednesday, according to police.

In the latest stickup, police said the romantic robber entered the Bank of Smith Town in New York's Chelsea neighborhood shortly before 9 a.m. Thursday, where he approached the teller and removed a demand note from inside the bouquet, which was draped in pink tissue paper.

After the teller forked over the cash, the petal-packer quickly fled the scene, but left his blossoms behind.

In a July 8 incident, Pemberton allegedly hit Capital One Bank, only that time he used a potted plant to deliver the demand note.

Pemberton's arrest comes on the heels of a string of strange robberies in New York. Earlier this month, a man thought to be in his 60s or 70s tried to knock off an upscale clothing store while carrying a cane and wearing a nasal tube connected to an oxygen tank. And in June, a thief hit a Manhattan shoe store while wearing a cat mask.