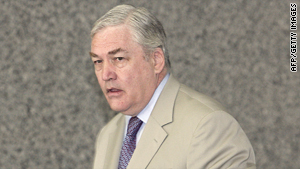 (CNN) -- An appellate court on Monday ruled that jailed media mogul Conrad Black can be released on bail.

A judge will now set the bail conditions for Black, who is serving a six-and-a-half-year prison term for fraud. It was unclear when Black might be freed on bail.

Black formerly headed Hollinger International Inc., a media giant that published hundreds of newspapers including the Chicago Sun-Times, the Jerusalem Post, The Daily Telegraph of London and the National Post in Canada.

He was convicted in 2007 of fraud involving the sale of assets of Hollinger. However, the U.S. Supreme Court last month threw out the the law under which Black was convicted, setting up his appeal and request for release on bail while it is heard.

In 2001, Black gave up his Canadian citizenship so he could become a member of Britain's House of Lords.