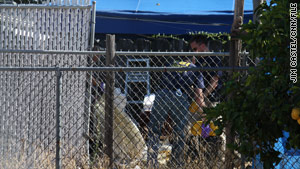 (CNN) -- California Gov. Arnold Schwarzenegger on Friday signed a $20 million settlement for Jaycee Dugard, a woman who was held captive for 18 years by a convicted rapist who had been under the supervision of the state.

Parole officers saw and spoke to Dugard during visits to the home of the man accused of holding her captive, but they never questioned why she was there, California officials disclose in newly released documents that figured in the settlement.

At least three parole officers spotted Dugard at the home of Phillip Garrido, a convicted rapist who had been under California state supervision since 1999, according to a June memo from the California attorney general's office. On at least one occasion, a parole officer spoke to her and one of her daughters, whom investigators say Garrido fathered during her captivity.

But those officers "failed to investigate their identities or their relationship to Garrido," the memo states.

The document outlined the $20 million settlement between Dugard and California authorities, which the state Legislature approved last week. It was drafted to brief state lawmakers on the settlement before their vote, said Christine Gasparac, an attorney general's office spokeswoman.

Dugard disappeared in 1991, at age 11, and was found in August 2009 at Garrido's home in Antioch, about 45 miles east of San Francisco. Garrido and his wife, Nancy, have pleaded not guilty to 29 felony counts in the case.

Garrido was released on parole in 1988 after serving less than 12 years of a 50-to-life sentence for rape in federal and Nevada prisons. His victim in that case, Katie Callaway Hall, told CNN's "Issues with Jane Velez-Mitchell" that the latest revelation was "unbelievable."

"It's just one more astonishing fact in a long line of errors," said Hall, who is now an advocate for rape victims.

Responsibilty for Garrido's parole was transferred to California authorities in 1999.

A November 2009 investigation found parole officers failed to follow utility wires running from Garrido's house toward the shed where Dugard was held, didn't check out the presence of a 12-year-old girl during a visit or act on information that indicated Garrido had violated the terms of his release.

The June 25 memo concluded that while the state could have successfully defended some of the claims on procedural grounds, the state Department of Corrections and Rehabilitation "recognizes that this case has a unique and tragic character."

"Obviously, no amount of money could compensate these plaintiffs for what they have endured," it reads. But the settlement will provide Dugard and her daughters -- now teenagers -- with "the financial support that they will need to rebuild their lives."

The document estimates the family will need as much as $7 million alone for decades of counseling.