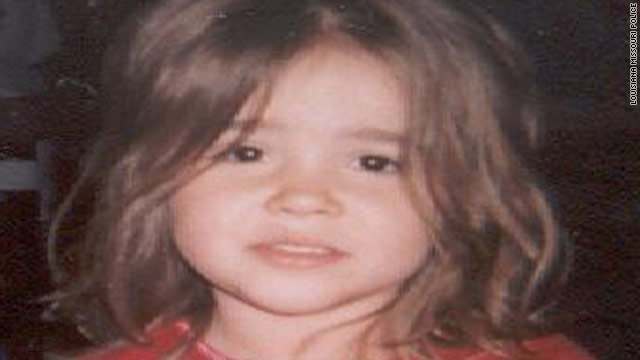 Alisa Maier, 4, was wearing a white shirt and denim shorts when she was abducted Monday evening.
STORY HIGHLIGHTS

(CNN) -- The mother of a 4-year-old girl snatched from the front yard of her small-town Missouri home tried to chase after her daughter's abductor, a neighbor said Tuesday.

Alisa Maier was kidnapped Monday evening in Louisiana, Missouri, while she was playing with her brother, police there said. Appearing at a news conference Tuesday morning, grandfather Roy Harrison told reporters, "I want this baby back."

"Please, anybody, if you know anything, call this guy back here," he said, pointing to Louisiana Police Chief Richard Hughes. "Call the FBI. Call whoever you need to call."

Anita McKlevis, who lives across the street from the family, said Alisa's mother was "just beside herself" and tried to pursue the man who abducted the girl.

"She jumped up and went across the street, got into her van and took off," McKlevis told HLN's "Issues with Jane Velez-Mitchell."

She said the children were regularly supervised by parents or grandparents while playing outside: "I never seen this little girl without her parents," McKlevis added.

Louisiana is about 80 miles north of St. Louis. Michael Kaste, an agent from the FBI's St. Louis office, said between 75 and 100 law enforcement officers -- including about 30 FBI agents -- and about 50 volunteers were taking part in the search. Investigators are also questioning known sex offenders about the girl's abduction, he said.

"We're going to interview anybody we think could be involved in this," Kaste said.

Alisa was wearing a white T-shirt and denim shorts when she was taken. Hughes said investigators in Louisiana, about 80 miles north of St. Louis, have no indication that her kidnapping was anything other than a random abduction.

Police are examining surveillance video from local businesses in hopes of finding some sign of the abductor, a man of indeterminate age who drove off in a dark-colored sedan with front-end damage, Hughes said. The town of about 4,000 is located just across the Mississippi River from Illinois, where state and county authorities are also involved in the search, he said.

"Ultimately, our goal is to bring her back here to her family," Hughes said.

Harrison called her "a really good girl, always smiling, happy-go-lucky. We really appreciate everybody getting together to try to help us find her."