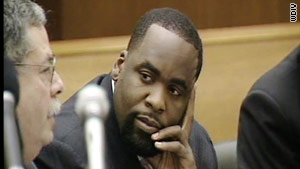 (CNN) -- Former Detroit Mayor Kwame Kilpatrick was indicted Wednesday on 19 counts of federal fraud and tax charges, according to the U.S. attorney's office in the Eastern District of Michigan.

The charges against him include 10 counts of mail fraud, three counts of wire fraud, five counts of filing a false tax return and one count of tax evasion, according to U.S. District Court spokesman Rod Hanson.

The charges stem from an alleged scheme in which Kilpatrick used donations to his Kilpatrick Civic Fund -- a tax-exempt social welfare organization -- to pay for such personal expenses as yoga and golf lessons, and campaign expenses in his 2001 and 2005 bids for mayor, according to the indictment.

Kilpatrick had claimed the fund would go toward community services and voter registration information, the indictment says.

Kilpatrick, 40, is currently serving five years in prison for violating probation in a 2008 case against him. That case involved two felony counts of obstruction of justice stemming from Kilpatrick's efforts to cover up an extramarital affair.

He also pleaded no contest to charges of assaulting a police officer attempting to serve a subpoena on a Kilpatrick friend in the case.