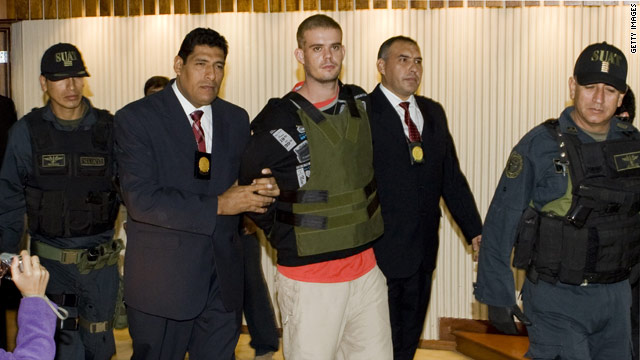 (CNN) -- A representative for Natalee Holloway's mother who paid $25,000 for information on the whereabouts of her remains last month was an undercover FBI agent, a federal law enforcement official told CNN.

However, the FBI and the U.S. attorney's office in Birmingham, Alabama, said Wednesday that the FBI did not supply the money.

"Some news accounts have suggested that the FBI provided $25,000 in funds that were transmitted to van der Sloot. This is incorrect. The funds involved were private funds," the FBI and U.S. attorney's office said in a statement.

Video: Charges depend on reenactment

Interpol documents show that the $15,000 was transferred to a personal bank account in the Netherlands. The information van der Sloot provided to the FBI was not true, according to the documents.

It's unclear if that money funded van der Sloot's trip to Colombia and into Peru, where authorities said he confessed this week to killing 21-year-old Stephany Flores Ramirez.

Members of Flores' family told CNN they knew days ago that the FBI had paid van der Sloot.

"We really don't have anything to say about it or what could have happened if we knew this information," said brother Enrique Flores, speaking by phone from Peru.

"It won't make any change today. Her mom is praying every day. We are not having contact with a lot of people. We want to be left alone."

Although the investigation involving alleged extortion had been in motion for several weeks at the time of Flores' death, "it was not sufficiently developed to bring charges prior to the time van der Sloot left Aruba," the FBI statement said.

"This is not due to any fault on the part of the FBI or the U.S. attorney's office, where agents and prosecutors were working as hard as possible to bring the case to fruition when they learned of the murder. A case based on events outside of the United States is a complex matter, and work was proceeding with all deliberate speed to prepare the evidence, the charges and the necessary procedures to obtain custody of van der Sloot," the statement said.

Van der Sloot, a Dutch citizen, was twice arrested in connection with the 2005 disappearance of Holloway but was released for lack of evidence.

That came as a shock to Natalee Holloway's father Dave Holloway.

"He didn't know about it ... and he just didn't have very much to say about it because he was not involved," the attorney said.

In exchange for payment, van der Sloot showed a person -- described in Interpol documents as Beth Holloway's representative -- a house in Aruba where supposedly Holloway's remains were located.

When records showed that the house wasn't even built at the time of her disappearance, van der Sloot admitted he lied, Interpol said.

"We did some technical work" and "worked together," Stein said.