Arrest leads to seizure of almost a ton of marijuana 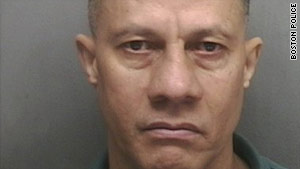 (CNN) -- Boston police have seized almost a ton of marijuana in the city's largest such haul in recent memory, according to Suffolk County, Massachusetts, District Attorney Daniel F. Conley.

Edgar Gonzalez, 40, was arraigned Thursday in Dorchester District Court, accused of trafficking in marijuana. He also is being held in connection with an immigration violation by U.S. Customs and Immigration Enforcement, according to a news release from District Attorney Conley. Conviction on the drug charge is punishable by up to 15 years in state prison.

Boston police were originally conducting a separate search Wednesday when they witnessed what they described as a suspicious man fleeing from a building, according to the release from the district attorney. Police intercepted the man, identified as Gonzalez, and noticed the door to his apartment was open.

Because of an existing immigration detainment order by U.S. Customs and Immigrations Enforcement as well as his behavior in trying to flee, officers were able to conduct a "protective sweep" of his residence, authorities said.

In the apartment police found 40 large bales of marijuana wrapped in plastic, according to the press release. After obtaining a search warrant for Gonzalez's apartment, police seized the marijuana -- weighing about 2,000 pounds, or one ton -- as well as scales, a vacuum sealer and shrink wrap.

Gonzalez's attorney, Holly Clarke, did not return calls from CNN.

Gonzalez was being held with bail set at $1 million, authorities said. His trial date is set for June 30 in Dorchester District Court.

Arrest leads to seizure of almost a ton of marijuana