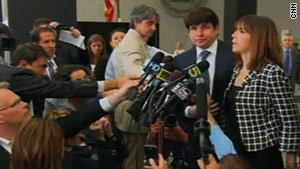 Former Illinois governor Rod Blagojevich enters the courthouse in Chicago for the first day of his trial.
STORY HIGHLIGHTS

Blagojevich is charged with racketeering and fraud, among other charges.

Fundraisers "understood that Blagojevich viewed those appointments as an opportunity to reward big fundraisers or Blagojevich's supporters," prosecutors wrote. "Blagojevich consistently wanted to know who recommended a particular candidate for a board or commission slot."

In April, Blagojevich held a defiant news conference in which he called his accusers "liars" and "cowards" and directly challenged U.S. Attorney Patrick Fitzgerald, who is heading the prosecution.

He repeated that he was innocent and that tapes that FBI agents made of his phone conversations would prove it.

Also in April, Blagojevich's lawyers filed a motion seeking to subpoena Obama to testify in the case.

According to the 10-page motion, Obama's public assertion that he had no involvement in talks about filling his Senate seat contradicts information from another witness in the case.

"The defense understands that the President of the United States of America is not a routine witness and would not request his appearance if it did not think he was critical to the liberty of Rod Blagojevich," the motion said.