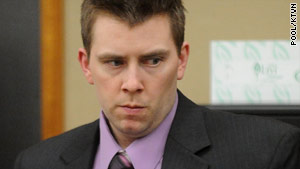 James Biela was convicted of first-degree murder and sexual assault in the death of Brianna Denison.

(CNN) -- A Nevada man was found guilty Thursday of raping and strangling a 19-year-old student in a string of attacks that rattled the university community in Reno two years ago.

The father and former construction worker faces the death penalty.

Denison, a sophomore at Santa Barbara City College in California, was last seen alive on her friend's couch on January 20, 2008. Three weeks later, her body was found in a field near her friend's home. She had been sexually assaulted and strangled.

A pair of panties that did not belong to Denison were found near the body, in what police said was a "calling card" that helped them connect Biela not only to Denison, but also to the other assaults.

From the witness stand in Biela's capital murder trial, one of the women recounted how she was attacked on the University of Nevada-Reno campus. She said her assailant threatened her with a gun, raped her and took her panties as a souvenir. The defense challenged the identification because she earlier told a friend she could not describe her attacker to police.

The second woman, a student at the university, testified she was abducted outside her apartment and driven to a dark area and raped in the attacker's vehicle. The woman testified that her assailant asked for her panties and took them with him.

The trial began with emotional testimony from Denison's mother, her boyfriend, and a video showing her with friends at a diner just a few hours before she was abducted.

Denison was visiting friends in her hometown of Reno. After they attended a concert, she slept on the living room couch in a friend's off-campus apartment. While she slept, someone crept into the apartment and snatched her, police and prosecutors said.

Her case triggered a flurry of national media coverage and thousands of tips, including the one that led to Biela's arrest.

Police released a photo of the panties near Denison's body and a description of the pickup truck. A friend of Biela's girlfriend saw the photo of the panties, and thought she recognized the truck police described. She told investigators a friend's boyfriend had a truck similar to the description, and that her friend had seen women's panties inside it.

Detectives immediately followed up on the tip and, with permission from the girlfriend, took DNA samples from Biela's 4-year-old son. Lab tests showed that the boy's father -- Biela -- was almost certainly a match for the DNA found on the doorknob and at the crime scene, police said.

DNA obtained from the other victim's rape kit matched Biela's, according to testimony. Biela's defense attorneys challenged the DNA testing method, claiming it was not accurate.