Ex-lawyer jailed 14 months, but not charged with a crime 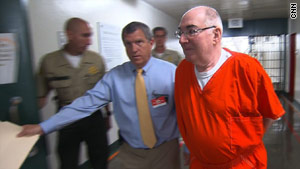 Los Angeles, California (CNN) -- Once a dapper Beverly Hills attorney known for his bow tie, Richard Fine has been held in solitary confinement at Los Angeles County Men's Central Jail for 14 months, even though he's never been charged with a crime.

Fine, a 70-year- old taxpayer's advocate who once worked for the Department of Justice, is being held for contempt of court.

Superior Court Judge David Yaffe found Fine in contempt after he refused to turn over financial documents and answer questions when ordered to pay an opposing party's attorney's fees, according to court documents.

Fine says his contempt order masks the real reason why he's in jail. He claims he's a political prisoner.

"I ended up here because I did the one thing no other lawyer in California is willing to do. I took on the corruption of the courts," Fine said in a jailhouse interview with CNN.

For the last decade, Fine has filed appeal after appeal against Los Angeles County's Superior Court judges. He says the judges each accept what he calls yearly "bribes" from the county worth $57,000. That's on top of a $178,789 annual salary, paid by the state. The county calls the extra payments "supplemental benefits" -- a way to attract and retain quality judges in a high-cost city.

While the practice of paying supplemental benefits is common in California, most high-cost cities elsewhere don't hand out these kinds of benefits. Judges in Miami, Chicago and Boston receive no extra county dollars.

Video: In jail but not charged with a crime

Video: Attorney was 'shut up and locked away'
RELATED TOPICS

Judges in Los Angeles County not only have the highest state salaries in the nation, they also get tens of thousands of dollars in county benefits. These payments, Fine says, mean judges are unlikely to rule against the county when it is involved in a lawsuit.

In the last two fiscal years, Los Angeles County won all but one of the nine trials that went before a judge, according to Steven Estabrook, the county's litigation cost manager.

"The reason I'm here is the retaliation of the judges," Fine says. "They figured they're going to throw me in jail and that way they feel that they can stop me."

Fine's decade-long crusade against the judges eventually led to his disbarment last year. Joe Carlucci was the lead prosecutor for the California State Bar. Carlucci says whenever Fine lost a case, he would appeal and argue the judges were corrupt.

"What he ultimately did was to delay proceedings, to level false accusations against judges," Carlucci says. "All of those lawsuits were found to have been frivolous and meritless."

Judge Yaffe and county officials refused to comment on Fine's case while it's still pending.

"Fine holds the key to his jail cell," Kevin McCormick, one of the court's attorneys, pointed out in a court filing. In other words, Fine will go free once he hands over the documents the court seeks and answers the judge's questions.

The technical term is "coercive confinement" -- jail-time until a person follows a judge's order.

Norris says Fine's confinement has gone on too long.

Norris won a case in 2008 that found county payments to judges unconstitutional. The California Legislature swiftly passed a bill that enabled counties to continue paying the extra benefits.

"I think it's a lack of judicial integrity to say enough is enough," Norris says. "We've got a man, 70-year-old attorney, in jail for over a year on coercive confinement and that is way beyond the pale. No matter what else he may have done, that is improper."

Fine's jail cell could be used for a more violent offender, Whitmore added. In fact, Los Angeles County's jails have in recent months released hundreds of inmates before their terms were up due to budget constraints.

Fine took his pencil-and-paper fight from solitary confinement to the U.S Supreme Court, which ruled Monday it would not hear the case. The court offered no explanation.

Meanwhile, Fine's family stands behind him -- even in the face of home foreclosure.

"My husband has always been the straightest arrow, hardworking, very successful attorney, and for this to happen to him is unbelievable," says Maryellen Fine, his wife of 27 years.

"I'll look back with tears with all the time I might have missed with the family," Fine says tearfully just before he is handcuffed and walked back to his cell.

"We don't know what is going to be next," says Fine's daughter, Victoria. "Every day is just one more day where I think maybe I'm going to get a phone call that says dad's coming home."