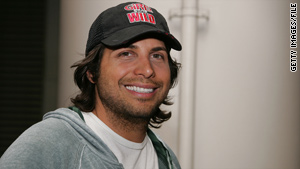 Washington (CNN) -- The controversial founder of the firm that features "Girls Gone Wild" videos -- with young women cavorting and baring their breasts -- is in trouble with federal authorities once again.

In the latest of a series of scrapes with the law, Joseph Francis, 37, has been accused by the Justice Department of violating a court order that forbids him from disclosing sealed court documents from his income tax battles.

In a document filed in federal court in Los Angeles on Friday, the Justice Department asks a federal judge to order Francis to appear in court and face a criminal contempt charge.

The government says that on April 9, Francis revealed to a creditor a sealed interview with a government witness. The court document says the unidentified recipient gave it to the government.

"In this case, based on the evidence obtained, the government seeks a sentence that includes either incarceration or a monetary penalty, but recommends that any resulting sentence of incarceration be less than six months," the prosecutor's court document says.

His attorneys declared victory because Francis did not have to serve any jail time. He received one year of supervised release.

However, two months later, the government slapped Francis with a $33 million tax lien for failure to pay income taxes from 2001 through 2003. That case is pending.