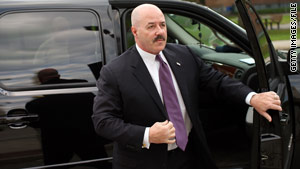 Kerik reported to the medium-security facility, which houses some 500 inmates, at approximately 1 p.m. ET, authorities said.

Kerik -- nominated by President George Bush in 2004 to be homeland security adviser, only to later withdraw from consideration -- was sentenced to four years in prison last February. He pleaded guilty to charges including lying to Bush administration officials during his 2004 nomination.

Ed Ross, a spokesman for the Federal Bureau of Prisons, said Kerik will be expected to perform a number of manual jobs including plumbing, landscaping and food service at the prison, which also has a minimum security camp.

On the eve of his imprisonment, Kerik maintained his prosecution was unjust, and said he had to prepare his two daughters, ages 7 and 10, for his departure.

"Words cannot express my disappointment in the prosecutors and the judge's behavior, and his sentence that followed," Kerik wrote on his blog Sunday.

"I have repeatedly expressed remorse for what I may have done, however, unlike many, I can't remain silent in the face of what I believe has been a gross injustice, which I pray will be remedied by an appellate court."

He said he made his two daughters watch the movie "Rocky Balboa" for the scene in which Sylvester Stallone's character tells his son that the world can be an unfair place but one has to persevere.

Words cannot express my disappointment in the prosecutors and the judge's behavior ...
--Bernard Kerik, on blog

"As I prepare to serve my sentence, I have had to likewise prepare Angelina and Celine, my 7- and 10-year-old daughters for what is next to come, and had to teach them that there are times when we are put in situations which are beyond our control and that no matter how undeserved, unsought, or unwanted, we must find the strength, courage, and perseverance to carry on and move forward."

Kerik, 54, pleaded guilty in November to tax fraud and six other felonies. He has been under house arrest in Franklin Lakes, New Jersey, since then.

In court papers, prosecutors said Kerik denied to a White House official that there was "any possible concern" about his relationships with contractors involved in renovating his apartment or that he had any financial dealings with prospective city contractors.

Kerik had been scheduled to go to trial on various corruption charges, including allegations that he received and concealed benefits of about $255,000 in renovations to his Riverdale, New York, apartment from a company seeking to do business with the city of New York. He pleaded guilty to that charge and several tax-related counts in November.

In 2006, he pleaded guilty to accepting tens of thousands of dollars in gifts while working as city corrections commissioner. Under his plea agreement, he paid $221,000 in fines and avoided jail time.

Kerik ended his blog post Sunday, saying: "Finally, I can only hope that history will judge me based on my 30 years of public service to our great nation, and not by tabloid headlines, my imperfections, or the mistakes that I may have made."