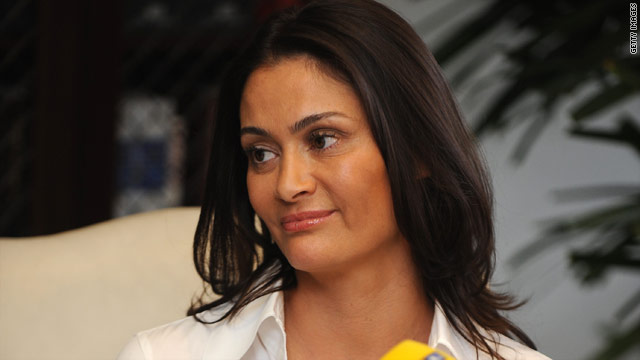 Los Angeles, California (CNN) -- A British actress says she was sexually abused by Roman Polanski when she was 16, after she was cast in a Polanski film in Paris, France.

"He sexually abused me in the worst possible way when I was just 16 years old," said Charlotte Lewis, now 42. She said the incident happened in 1983.

Polanski pleaded guilty to having unlawful sex with a 13-year-old girl in 1977 but fled to Europe before he was sentenced.

Lewis said she was coming forward now because Polanski's "legal team is portraying his previous offense against a minor as an isolated incident."

Polanski, 76, has been the subject of an international extradition battle since he was arrested in Switzerland in September on a U.S. fugitive warrant.

Lawyer Gloria Allred, who is representing Lewis, said they met with Los Angeles police investigators and a prosecutor on Thursday because she thinks the judge can "consider credible claims of predatory conduct" by Polanski when sentencing him on the older case.

"Mr. Polanski knew that I was only 16 years old when he met me and forced himself upon me in his apartment in Paris," Lewis said.

Mr. Polanski knew that I was only 16 years old when he met me and forced himself upon me.
--Charlotte Lewis, actress
RELATED TOPICS

Allred said it was "not relevant" that the legal age of consent in Paris was 15 when the sex took place, as it is now.

Neither Allred nor Lewis would describe how Polanski used force against the actress.

"He took advantage of me, and I have lived with the effects of his behavior ever since it occurred," Lewis said. "All I want is justice."

"We don't have any information about statements made at a Gloria Allred press conference today, but we do know that our district attorney continues to refuse to provide the Swiss government with accurate and complete information relevant to the extradition issue," defense spokeswoman Lynne Doll said.

Swiss authorities released the director from jail on $4.5 million bail in early December, "pending extradition" to the United States. The Swiss government is considering the extradition request.

Polanski, director of "The Pianist" and "Rosemary's Baby," has argued that the extradition request was politically motivated by a Los Angeles prosecutor who is seeking publicity and that it was unfair because he had already served his sentence.

He spent 45 days confined at California's Chino prison in 1977, but prosecutors argue that was only for him to be evaluated by psychologists before sentencing.

Polanski left the country after learning that the judge might not go along with the short jail term he expected to get in exchange for his guilty plea.

The recent documentary "Roman Polanski: Wanted and Desired" portrayed backroom deals in 1977 between prosecutors and a media-obsessed judge who was worried that his public image would suffer if he didn't send Polanski to prison.

A Los Angeles judge ruled in January that Polanski must return to the United States before the court can consider his legal arguments against his returning to prison.

The court also rejected a recent request by the victim in the Los Angeles case that the prosecution be dropped.