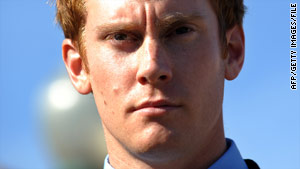 Norfolk, Virginia (CNN) -- An Iraqi detainee said he was kicked and punched while his hands were tied behind his back in a recording played Tuesday in the trial of a Navy SEAL accused of assaulting the detainee.

Petty Officer 2nd Class Matthew McCabe has pleaded not guilty to punching Ahmed Hashim Abed in the stomach, dereliction of duty and lying to investigators.

"It's a story you don't want to hear," said Navy Lt. Commander Nicholas Kadlec, the prosecutor. "And as the evidence unfolds, it becomes a story you just have to believe."

McCabe stared straight ahead as Kadlec told the jury that McCabe failed to live up to Navy standards when he struck a detainee in the abdomen and walked away while the prisoner lay on the floor bleeding.

"By the way, the entire time, the detainee had his hands tied behind his back," Kadlec said, urging the jury to muster the "moral courage" to convict McCabe.

"It's about doing the right thing, and holding the accused accountable," he said.

"The SEALs did what they were trained to do," he said to the jury "They were serving an Iraqi arrest warrant."

Puckett said the evidence will show that the detainee's mouth injury started as a canker sore and that the bleeding was self-inflicted -- not induced by McCabe.

McCabe is the last of three SEALs accused of abusing Abed, who was arrested in Iraq and charged with masterminding the 2004 slayings of four U.S. contractors in Falluja. The killings were widely covered by news organizations when the burned bodies of two contractors were paraded through Fallluja's streets and hanged from a bridge as their captors cheered.

In the recording of his three-hour deposition, Abed denied involvement with al-Qaeda or Hamas and said that U.S. and Iraqi forces raided his home and took him to a U.S. base, where he was attacked for five minutes.

Abed said he was standing with his hands tied behind his back when he was hit in the stomach. He described falling down from the force of the punch, hitting his face on the floor. He said he felt "pain in my face" and later tasted blood in his mouth.

While on the floor, Abed described being kicked several times with a boot-covered foot in his shoulder and back.

He said that although blindfolded, once he fell on the floor he was able see enough from beneath his eye-cover to determine that his attacker was bare-legged and wearing shorts. He did not identify McCabe as his assailant.

The two other SEALs in the case were acquitted in April in Iraq on charges of dereliction of duty and impeding an investigation. McCabe is the only one charged with abusing the detainee.