Judge takes himself off Anthony case

By Mayra Cuevas-Nazario and Beth Karas, In Session 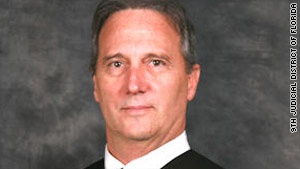 Judge Stan Strickland removed himself from Casey Anthony's murder trial, which has been reassigned.

(CNN) -- The judge in Casey Anthony's murder trial took himself off the case Monday after the defense contended he was biased against her.

"Over the past 20-plus months, in between media interviews, guest appearances on television shows and press conferences, defense counsel has filed a litany of motions," Ninth Circuit Court Judge Stan Strickland observed in an order recusing himself from the high-profile murder trial.

"At its core," the judge continued, "defense counsel's motion accuses the undersigned of being a 'self-aggrandizing media hound.' Indeed. The irony is rich."

The case has been reassigned to Judge Belvin Perry Jr.

"Judge Perry is a good judge; he knows the law," attorney for Casey Anthony's parents, Brad Conway, told CNN. "Stan Strickland is just as good and knowledgeable. He's also extremely patient. He lets you say what you have to say, then he rules."

Anthony is awaiting trial in Orange County, Florida, on a charge of first-degree murder in the death of her daughter, Caylee, who was 2 when she disappeared in June 2008. The little girl's remains were found near the Anthony home in December 2008.

Casey Anthony has pleaded not guilty, and her murder trial has been set for May 2011.

In a motion filed 12 minutes before the court closed on Friday, defense attorney Jose Baez accused Strickland of forming a "personal relationship" with blogger Dave Knechel, who writes under the pseudonym "Marinade Dave."

Knechel's blog includes made-up legal motions with titles such as "Casey Anthony must die!" "Caylee's murder: Premeditated and pretty stupid too" and "Guilty as charged."

Baez alleged that the judge called the blogger to inquire about his health and did not disclose the relationship with the defense. He also contends in court papers that the judge recognized Knechel at a court hearing and summoned him to the bench.

Strickland denies there was any personal relationship, saying in his order that he made only "infrequent sojourns into the blogosphere." He added that the blogger had criticized "those who came onto the blog for the sole purpose of bashing the defendant and her family." He said he thanked the blogger in open court for being "both fair and civilized."

Video of an October 19 hearing reviewed by In Session staff shows a bailiff pointing at Knechel. Off-camera audio reveals snippets of a conversation with the judge in which Knechel says people are reading his blog because he does a "good job, very simple."

Although Strickland denied wrongdoing, he acknowledged that repeated accusations of bias would be disruptive at a trial.

"Since the undersigned has now been accused of bias and wrongdoing, potentially each denial of a defense motion will generate renewed allegations of bias," Strickland wrote.

Conway recalled that when he first appeared before Perry years ago, the judge invited him into chambers and gave him two rules: "One, the train leaves at 8:30 a.m. Be on it. Two, be prepared."

Conway said that Perry assured him, "If you follow those two rules, you'll be fine."