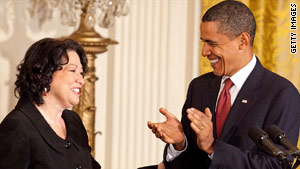 (CNN) -- If history is any guide, the White House could announce its nominee to replace retiring U.S. Supreme Court Justice John Paul Stevens within days.

In fact, nine of the past 14 court nominees were named within six days of the position becoming available.

President Obama took 25 days to announce Sonia Sotomayor as his pick to replace Justice David Souter who retired in 2009.

Obama gets second chance to put stamp on court

The fastest announcement of a Supreme Court nominee in recent history was in 1986, when President Ronald Reagan named Justice William Rehnquist as his choice to replace Chief Justice Warren Burger the same day Burger announced his retirement.

Following the nomination, the required confirmation vote by the Senate has taken an average of 70 days, among the 17 nominations that made it to a vote during the past 40 years.

Recently John Roberts was confirmed as Chief Justice only 24 days after being named as the nominee to replace Rehnquist, although Roberts had previously been nominated to replace Justice O'Connor.