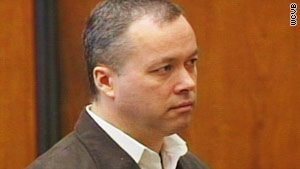 Mark Kerrigan was indicted Thrusday in the January 24 death of his father.

(CNN) -- The brother of figure skater Nancy Kerrigan has been indicted on charges including manslaughter in the January death of his father.

Through lawyer Tracy Miner, the Kerrigan family said it was "deeply disappointed by the continued prosecution of Mark Kerrigan."

The family said it disagrees with the decision to indict Kerrigan but looks forward to having the facts considered by a jury. "The Kerrigan family continues to believe that he is not responsible for the death of their beloved Daniel Kerrigan," the statement said.

"Mark Kerrigan has been living at home supporting and caring for his mother and is in complete compliance with all conditions of his pre-trial release and we see no reason that the situation should change."

Prosecutors allege that during an argument with his father, an intoxicated Mark Kerrigan became violent and grabbed his father around the neck, causing a compression fracture to cartilage in the older man's larynx. Daniel Kerrigan was later pronounced dead at a hospital.

"We allege that the defendant's violent reckless actions and complete disregard for his father's safety and well-being endangered Daniel Kerrigan's life and resulted in the substantial harm that led to his untimely death," District Attorney Gerry Leone said in the statement.

Mark Kerrigan is set to be arraigned Friday in Woburn Superior Court, authorities said. He was released from jail in February on $10,000 bail on the assault and battery charges, to which he pleaded not guilty.

The argument in which Mark Kerrigan allegedly injured his father came because he wasn't allowed to use the telephone late at night, Leone said in the statement -- "a seemingly trivial issue that we allege triggered the defendant's drunken rage and led to his committing the malicious acts that led to the death of his elderly father."

Kerrigan's family has previously said they do not blame anyone for the death of Daniel Kerrigan, saying he had a pre-existing heart condition.

At about 7:30 p.m. on January 23, police received a 9-1-1 call from the Stoneham, Massachusetts, home where Mark Kerrigan was living with his parents, according to prosecutors. Mark Kerrigan and a female acquaintance were arguing, and she called for help because he would not allow her to leave, authorities said.

Daniel Kerrigan returned home when he was alerted to the situation, and police left after speaking with those involved, the statement said.

"Over the next six hours, the defendant allegedly drank liquor, became intoxicated and repeatedly argued with his parents over the use of the house phone to contact the female," prosecutors said. "The defendant had been calling and leaving over a dozen messages on the female's cell phone."

After midnight, Mark Kerrigan came into his parents' bedroom screaming obscenities about the telephone not working, and his father and mother came downstairs to talk to him, authorities said. A "heated argument" ensued in which Mark Kerrigan allegedly pushed, grabbed and shoved his father, knocking several pictures off the wall, the statement said.

"The defendant then allegedly forcibly grabbed the victim around the neck, causing a compression fracture to the left thyroid cartilage of his larynx, and the victim fell to the kitchen floor on his back, unconscious," prosecutors said.

Mark Kerrigan's mother called 911, and "during her recorded call for help, the defendant is heard screaming obscenities at his father and yelling at him," authorities said. Arriving medical personnel found Daniel Kerrigan suffering from cardiac dysrhythmia, or abnormal heart rhythm.

When approached by officers, Mark Kerrigan was hiding a bottle of liquor and was "obviously intoxicated" and combative, authorities said. He told police he had argued with his father and grabbed him around the neck, and that the older man had fallen to the floor, prosecutors said, at one point saying his father was faking it. Prosecutors previously said police had to subdue Mark Kerrigan with pepper spray.

A medical examiner found Daniel Kerrigan's death came from cardiac dysrhythmia triggered by the argument that resulted in his larynx injury.

Kerrigan's family said earlier, in a statement released through their attorney, that they believe the medical examiner's finding to be "premature and inaccurate."

At a previous court hearing, Mark Kerrigan's attorney, Denise Moore, said that he was unemployed, had recently been released from a correctional facility and was taking medication and seeking psychological help for post-traumatic stress, apparently from his time in the Army.

Nancy Kerrigan first gained prominence by winning a bronze medal at the 1992 Winter Olympics in Albertville, France. In 1994, she earned an Olympic silver medal in Lillehammer, Norway. But she is perhaps best known for being injured in an attack before the 1994 Winter Games by skating rival Tonya Harding's ex-husband and an accomplice.